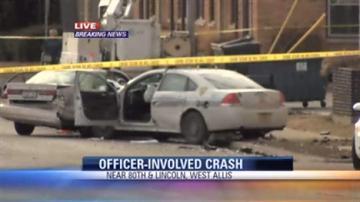 West Allis police say their officer was heading west on Lincoln Avenue to investigate an accident on S. 87Th St. and W.Lincoln Ave. Investigators say the officer had his lights and sirens activated. The officer struck the 81-year-old man's vehicle, and both were transported to a local hospital.

The Wisconsin State Patrol continues to investigate the crash, and all circumstances are currently under investigation.