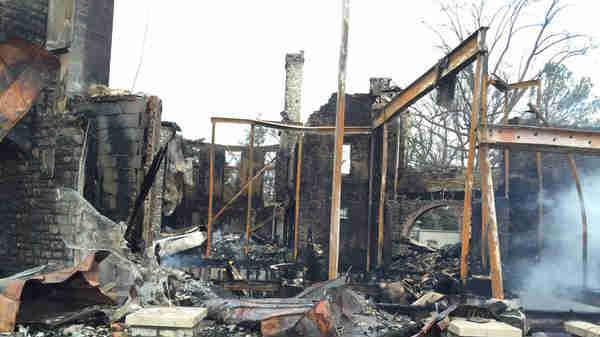 (CNN) Six people are unaccounted for after a fire destroyed a mansion in Annapolis, Maryland, early Monday morning, according to CNN affiliate WBAL.

Pyle had not been heard from on Monday and his colleagues at ScienceLogic were \"hoping for a miracle,\" CNN affiliate WJLA reported.

Pyle was believed to have been at home with his wife and four grandchildren.

Fire officials said they were alerted about 3:30 a.m. Monday to the fire in the 16,000-square-foot, two-story house, WBAL said. About 80 firefighters responded.

The Bureau of Alcohol, Tobacco, Firearms and Explosives is assisting the local fire department and an ATF national response team is being assembled because the fire was deemed suspicious, a law enforcement official said.

The burned-out home is being treated as a crime scene until investigators figure out the cause, the official said.

Anne Arundel County Fire Capt. Russ Davies told WBAL that fire crews had difficulty knocking down the blaze because the house is secluded, apparently with no fire hydrants on the scene.

Photos the fire department posted on Twitter showed hoses stretched for long distances. Davies said it took several hours for fire department tanker trucks and a fire boat on an adjacent creek to bring the fire under control, he said.

ATF Special Agent Dave Cheplak said no one has searched for possible victims yet because of the size and heat of the fire.