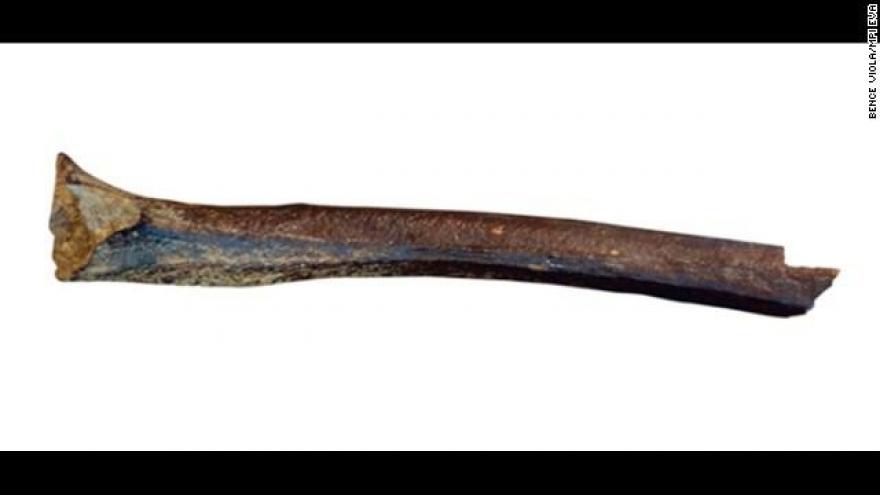 DNA from a 45,000-year-old leg bone is giving scientists a better idea of when modern humans first started mating with Neanderthals.

The thigh bone was found six years ago on the banks of the Irtysh River in Siberia by Nikolai Peristov, a Russian artist who carves jewelry from ancient mammoth tusks, according to the journal Nature.

"It was quite fossilized, and the hope was that it might turn out (to be) old. We hit the jackpot," Bence Viola, a paleoanthropologist who co-led a study of the remains, told Nature. "It was older than any other modern human yet dated."

For those who aren't familiar with our Stone Age ancestors, Neanderthals are an extinct species of human who differ in DNA from what scientists call "modern humans" by less than 1%. Modern humans first left Africa about 60,000 years ago, according to National Geographic, and wandered toward Asia and Europe. There, they encountered Neanderthals and another species of human called Denisovans.

Scientists believe Neanderthals died out about 30,000 years ago, possibly because they were simply absorbed into the modern human population. Roughly 2% of genomes of non-Africans today come from the Neanderthal species, according to Nature.

Sequencing of the 45,000-year-old bone's DNA showed that 2.3% of his genome also came from Neanderthals, according to a study published Wednesday. His Neanderthal DNA segments were long, the scientists say, which suggests that the love fest between the two species began between 50,000 and 60,000 years ago.

"Paternal and maternal chromosomes are shuffled together in each generation, so that over time the DNA segments from any individual become shorter," Nature explains.

Of course, when it comes to evolution, there's always a debate. Some scientists believe modern humans left Africa more than 100,000 years ago.

"This is just a random find in a Siberian river deposit," Chris Stringer, a paleoanthropologist at London's Natural History Museum, told Nature. "What else could be there when they start looking systematically?"