28 people arrested during third night of protests in Wauwatosa 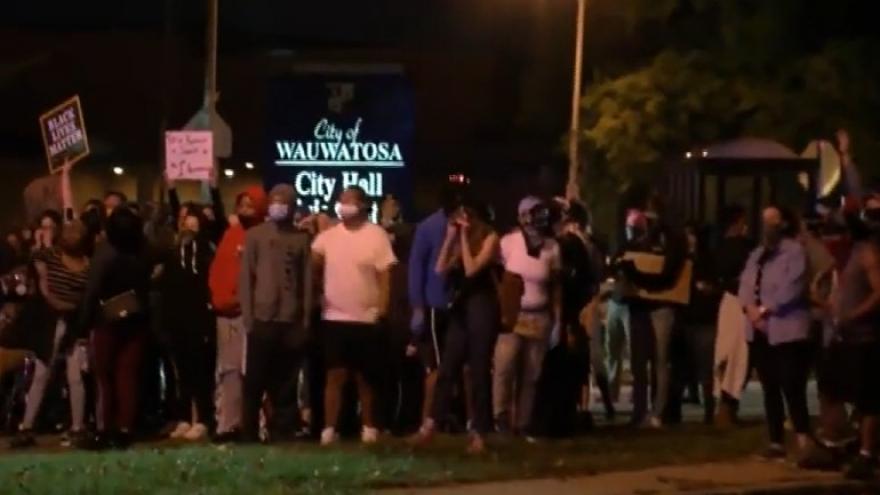 WAUWATOSA, Wis. (CBS 58) -- Officers arrested 28 people during the third night of protests in Wauwatosa Friday, Oct. 9 following the decision to not charge Officer Joseph Mensah in the shooting death of Alvin Cole.

According to the Wauwatosa police department, two of the arrests were felony arrests, one was a misdemeanor arrest, and 25 were municipal arrests. The Wauwatosa Fire Department also evaluated two of those adults for minor injuries.

Officials also say a handgun, materials to start fires, and a stolen vehicle were recovered by law enforcement personnel.

Wauwatosa police continue to urge all citizens to comply with the emergency order in place during the hours of 7 p.m. and 6 a.m. The order expires Monday, Oct. 12 at 6 a.m.

Police say at 5 p.m. on Friday, a group of about 60 to 75 people gathered outside Wauwatosa City Hall. Once the crowds began to grow in size within the hour, the Wisconsin National Guard was deployed.

At 6:50 p.m., a group on Center Street merged with a group of protesters at City Hall, according to police. The merge formed a crowd of nearly 100 people and 20 vehicles. Police also say children were in the crowd.

Police say, once the 7 p.m. curfew went into effect, they directed the crowd to disperse four times within the hour before making arrests.

According to a news release, a protester inside the group posted a photo of himself holding a handgun around 7:51 p.m. Officials also say protesters threw rocks and bottles at law enforcement personnel. Police say they used tear gas, as well as pepper balls and paint balls, in self defense.

Protesters continue chanting past curfew, law enforcement says they will be arrested if they don’t vacate the area @CBS58pic.twitter.com/gxJvXJI8DG

After using teargas, pushing the protesters away from City Hall, police are now making arrests pic.twitter.com/MlBEYmRqUa

According to police, protesters attempted to block the street with dumpsters and other items on North around 8 p.m. 20 minutes later, police say they observed the group attempting to set something on fire, but the group was not successful.

Police also say protesters broke the windows of Snap Fitness on North. Shortly after, police took six people into custody who had attempted to start fires. Moments later, police arrested one individual who was in possession of burning materials, including lighter fluid.

Officials say a protest group with nearly 20 cars stopped at the West Allis Police Department around 10 p.m and departed around 12:45 a.m. Saturday, Oct. 10. Three cars arrived at the Wauwatosa Police Department at 1:15 a.m. and a member of the group demanded the release of prisoners, according to police. Police say there were no individuals in custody at the department.

According to a news release, one of the three cars allegedly fled the scene, almost striking a Wauwatosa Police Detective. The driver was apprehended after a short pursuit. Police say this occurred after the individual had gotten into a second car that was stolen. Police recovered a gun as well as the stolen car.