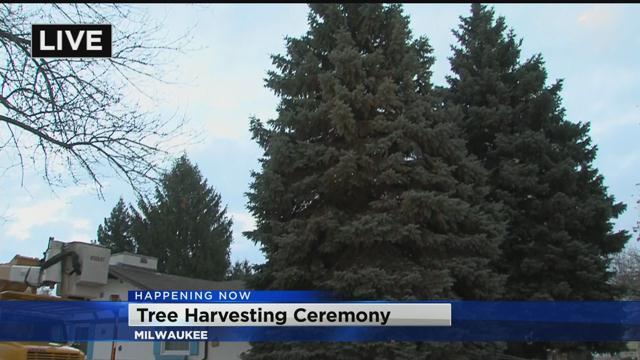 Some say it's the unofficial start of the holiday season.  The cutting of the Milwaukee City-County holiday tree and its transport to Red Arrow Park.  It took place this morning on the city's north side, and CBS58 was there live for the ceremony.

It's a 40-foot Colorado Blue Spruce, and it was on the property of Gen III Woodworks off the 7400 block of North Teutonia Avenue in the 1st Aldermanic District.  The Farina family made the donation.  Beside the family, various neighbors along with Mayor Tom Barrett were on hand to witness the occasion.

Once it was sawed off and hoisted away, the tree was taken to Red Arrow Park across from City Hall on a flatbed truck, escorted by the Milwaukee Police Department.

Over the next two weeks, it will be trimmed by city workers.  Then the lighting ceremony will take place on Thursday, November 19 at 5pm.  This year marks the 102nd time this holiday ritual has taken place.  This is the second oldest celebration of its kind next to the one in New York City.