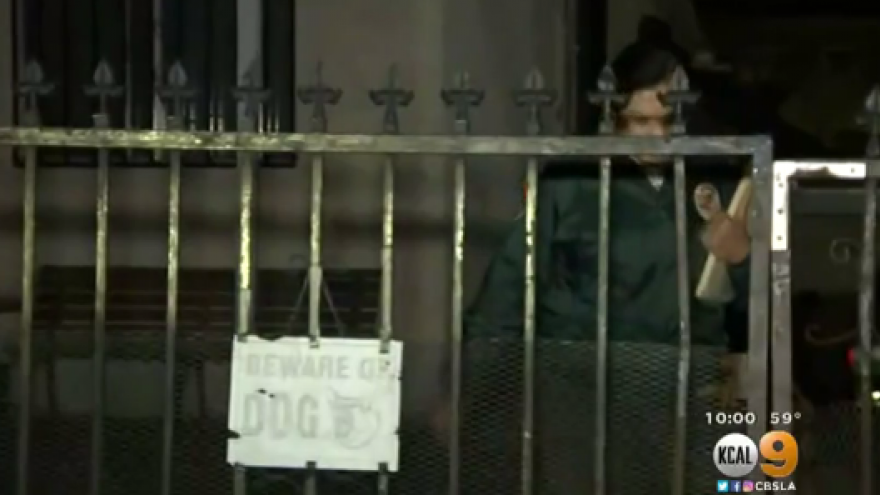 “I saw these two pit bulls pulling something apart. I thought it was a piece of material,” Frank Carrasco described the mauling he witnessed on Lincoln Park Avenue.

After killing the Pomeranian named Dodger, the pit bulls went after the dead dog’s elderly owner.

“They just attacked him. Just like that. They didn’t growl or nothing. One jumped on the man, and the other came out of the yard and jumped on the man and knocked the man down,” Carrasco recalled.

After calling 911, another neighbor snapped a picture of the victim, Valentin Herrera, 76, still lying on the ground after the attack.

The victim’s grandson told CBS2’s Erica Mandy that his grandfather is in the hospital with injuries to his arm and head and should be okay after surgery.

“He’s diabetic. He has dementia, all this stuff. Every day he walks the dog, nothing happens. They leave the gate open. Dogs come in, just ripped up our dog apart,” Herrera’s grandson, Christian Flores, said.

The pit bulls were taken to an animal shelter where they will be quarantined, said Angela Llerenas, an animal control officer with the Los Angeles Animal Services Department.

She said the animals will spend at least 10 days in quarantine until a their fate is decided in a hearing.

“It ain’t the dogs’ fault. It’s the owner for how he raised the dogs,” Flores added.

Carrasco said the pit bulls’ owner should have also done more after the attack. “He didn’t say anything. He just stayed at the fence like nothing happened. He didn’t even come out to help the man on the ground. He didn’t come out at all.”

Neighbors said the pit bulls have scared people before. Animal control officers said they are checking if there have been any previous complaints.