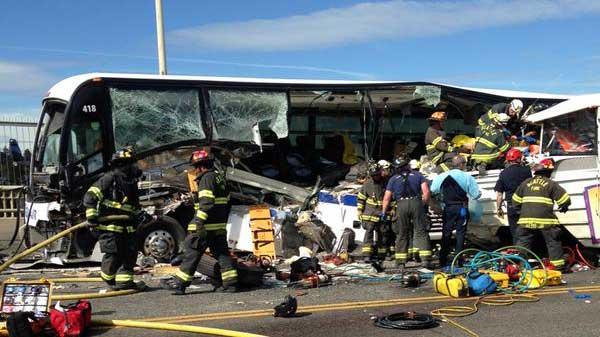 (CNN)Two people were killed and at least nine were critically injured when a tour bus and a duck boat tourist vehicle collided Thursday morning in Seattle, the city's fire department tweeted.

The department said that about 50 people had been evaluated for injuries after the crash.

It was not immediately clear how many of those people were hurt or how serious their conditions might be.

A nursing supervisor at Harborview Medical Center in Seattle did tell CNN that hospital alone is expecting 25 patients with unknown injuries.

Seattle police tweeted that Aurora Bridge between downtown Seattle and the Fremont neighborhood was closed in both directions, to both pedestrian and vehicle traffic.

Photos from the scene showed the two wrecked vehicles being surrounded by scores of firefighters -- with about 90 first responders in all rushing to the scene, according to Lt. Sue Stangl from the Seattle Fire Department.

Stangl told reporters it was not immediately known what caused the crash.