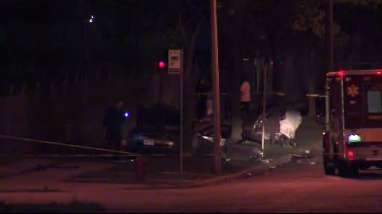 A 17-year-old was charged with two counts of homicide for the death caused by a crash on North 35th on August 26.

Donte Barnes, from Milwaukee, is facing two counts of homicide by negligent operation of a vehicle and one count of reckless driving.

According to the criminal complaint, officers determined the crash occurred on North 35th Street north of W. Keefe Avenue.

Demetrius Batchelor and Latray Hale died on the scene.

A 1999 Ford Taurus was traveling southbound on North 35th Street. The vehicle left 120 feet of tire marks on the road surface before striking the tree.

After striking the tree the Ford separated into two pieces.

Batchelor and Hale were ejected from the car.

Barnes suffered multiple fractures to his lower jaw, bruised lung, blood in his liver and a blood pool near his spine.

A witness estimated the vehicle was traveling 80 mph when other cars were traveling around 30 mph.

Barnes allegedly told police he was driving but did not remember being on 35th Street. He said they were coming back from playing basketball.

The other teenager in the car that survived said he believed he told Barnes to slow down.