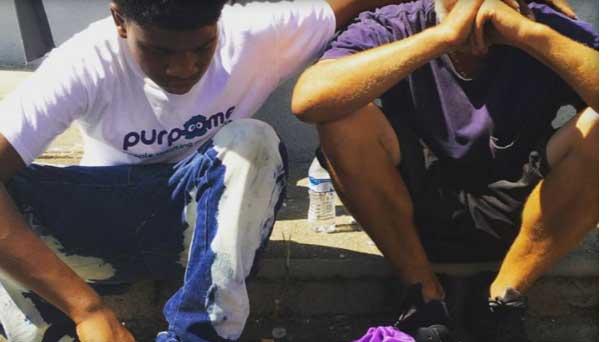 (CBS NEWS) This 14-year-old boy may not call himself a “hero,” but in the eyes of at least one homeless man in West Louisville, Kentucky, that’s exactly what he is.

Laron Tunstill, who is nicknamed “Ron Ron,” was with the non-profit group PURP - an organization that’s “dedicated to help kids find their purpose” - doing homeless outreach on Labor Day when he spotted a man wearing shoes covered in holes.

Without exchanging any words, the boy sat down next to the older man, untied his shoes and handed them over.

At first, the man said “No.” But Ron Ron insisted.

An image of the pair went viral on Facebook with nearly 8,000 shares.

“Today a 14 year old from West Louisville, KY gave his shoes off of his feet to a homeless man!” the nonprofit posted on Monday. “While other 14 year olds are shooting and joining gangs Ron Ron is living out his purpose in life.”

Jason Reynolds, the founder of PURP, said Ron Ron comes from a crime-ridden neighborhood. He’s been watching the teen grow into a fine young man over the past three years that he’s been with the organization.

“When I first met him, he was wild,” he joked. “Now, three years later, he’s finally coming around. He’s going around and spreading love and trying to help others spread love.”

Hundreds of people commented on the post, praising the boy for his selfless act.

“This is awesome, I was always taught it’s better to give then receive,” one Facebook user commented.

“What an awesome Ky teen - many people live their whole life without discovering the best part of living,” another replied.

Ron Ron says he was “just doing the right thing.”

On Wednesday, the group created a GoFundMe account with a goal of $5,000. Within 24 hours, the group has already received $690 in donations.

The money will go toward buying “Ron Ron” a new pair of shoes and possibly a bus that can help kids do more outreach in the community, Reynolds said.