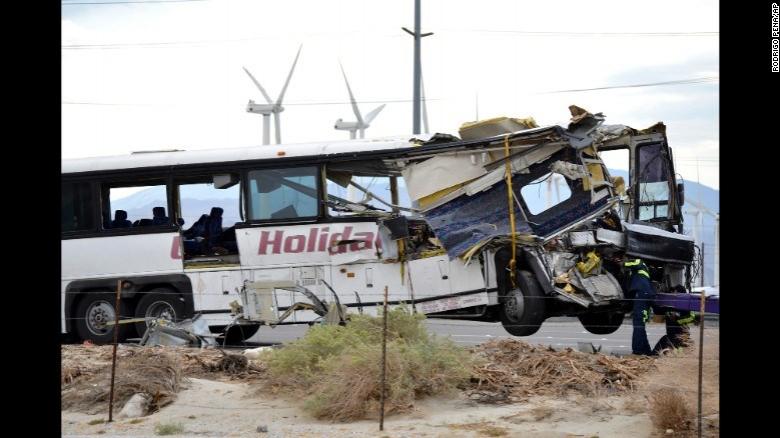 (CNN) A tour bus returning from a casino crashed into the rear of a semi-tractor trailer on Sunday near Palm Springs, California, killing 13 people and injuring 31 others, according to state police.

The bus driver was among those killed and the truck driver was injured, California Highway Patrol division Chief Jim Abele said at a press conference. Injuries range from minor to moderate, Abele said.

The 1996 MCI bus, operated by USA Holiday, was returning to Los Angeles from the Red Earth Casino near Salton Sea, according to Abele.

The accident happened at 5:17 a.m. local time on westbound Interstate 10, officials said. The cause was not immediately known.

The CHP and the National Transportation Safety Board are investigating.

It's unknown whether drugs, alcohol or fatigue were factors in the accident.Abele added: "The speed of the bus was so significant that when it hit the back of the big rig ... the trailer itself entered about 15 feet into the bus."Survivors said most passengers were asleep, Abele said. The victims were found in their seats and he believes most of the dead were sitting in the front of the bus, Abele said.

The bus was the only one the company operated. The chief didn't know whether the vehicle had seat belts.

The victims' identities were largely unknown due to the "swift extraction" by first responders and triage care needed, but all of the passengers are believed to be adults, Abele said.

"In almost 35 years I've never been to a crash where there's been 13 confirmed fatalities. So, It's tough," Abele said. "It's tough for all of us."

He said the bus had been inspected in 2014, 2015 and, most recently, in April of this year, with no mechanical problems reported.

Early videos from the scene show dozens of firefighters with ladders inside the mangled remains of the tour bus, struggling to reach the victims.

CNN affiliate KESQ reported that rescuers used a crane to search the wreckage.Abele said there was no fog at the time of the crash. He said traffic, including the trailer, had slowed because a maintenance crew had been periodically stringing wires across the roadway.

Abele said "the bus was traveling significantly faster than the tractor trailer that it struck from behind."

The truck driver told authorities he "felt a thump in the back ... he didn't know what specifically happened," Abele said.

California Highway Patrol shut all lanes of the highway for first responders to care for the injured. "There were so many injuries that they had to establish an emergency triage right there and treat the people right there on the scene," he said.

Police said the injured were taken to three hospitals, including Desert Regional Medical Center in Palm Springs. The hospital treated 14 patients, officials said. Five of those patients were in intensive care, but stable. Several were discharged.