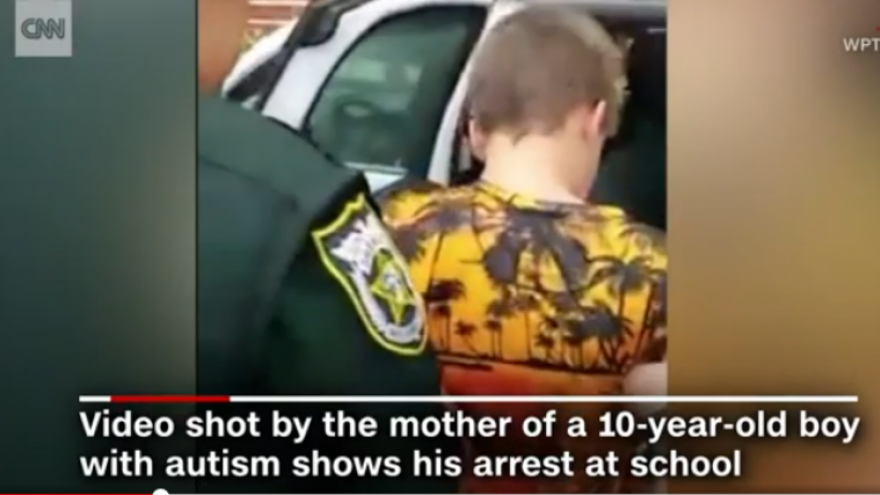 (CNN) When John Haygood, a 10-year-old boy with autism, was arrested last week at a school in Florida, he kept repeating that he didn't know what was happening, as seen in shaky cellphone video taken by his mother.

\"I don't know what's going on. I don't understand,\" he cried out. In the video, his hands are cuffed as two officers escort him to the back seat of a police car.

His mother, Luanne Haygood, followed behind them while recording the incident on her phone. In the video, John appears distraught, and yells some profanities.

Luanne is heard in the video speaking to the officers, \"Excuse me, do you have any paperwork or anything you can say to me?\"

John, a student at Okeechobee Achievement Academy in Okeechobee, Florida, was arrested at the school lastweek for felony battery against a paraprofessional in anOctober incident, allegedly punching and kicking his paraprofessional, which left scratches and marks, according to an incident report from the Okeechobee County Sheriff's Office (PDF).

The report also noted that John had allegedly made threats to kill the paraprofessional in a previous incident. On November 1, the paraprofessional requested to pursue criminal charges since John \"had been given plenty of opportunities to change his behavior and has not,\" the report said.

Autism spectrum disorder is a neurological and developmental disorder that affects how a person behaves and interacts with others, communicates, and learns. Many people with autism, for instance, are hypersensitive to and dislike being touched, as well as might be upset by a slight change in a routine.

In October, John was expelled from the Academy and has been completing his schoolwork from home since then, according to CNN affiliate WPBF. Last Wednesday, he returned to the Academy to take a standardized test, but \"was not being compliant and refused to test,\" the incident report said.

After John was given time to test, the arresting officer notified Luanne that John had an active warrant and had to be placed under arrest, the incident report said.

The arresting officer asked John if he would be willing to walk to the patrol car, and John replied, \"Don't touch me. I don't like to be touched,\" according to the incident report. He can be heard making similar comments in the video.

John was then handcuffed and transported to a juvenile detention center, where he spent the night.

The next day, John appeared in court on charges of assaulting his paraprofessional, was then released, and is now scheduled to appear in court again on May 11, WPBF reported.

On Tuesday, Luanne posted to her Facebook page that she obtained copies of police records for John.

The incident report noted that Luanne thought the charges against her son were dropped. Additionally, the school district sent a statement to CNN on Friday indicating that the paraprofessional requested to drop the charges.

\"I pressed charges in order to get the ball rolling to get his mother to realize he needs additional help. I think it is now understood the additional help is needed,\" the paraprofessional wrote about John in a copy of the request to drop charges (PDF).

Yet, state prosecutor Ashley Albright said that the charges have not been dropped. Once the paraprofessional filed to press charges, the legal process was set into motion.

\"In any criminal case, it's the state of Florida versus whoever is being charged,\" said Albright, who met Wednesday with the paraprofessional who pressed the charges. Albright added that instead of pursuing any criminal charges, this case will be approached \"nonjudicially.\"

\"In this case, we are not seeking to give him a criminal record or anything of that nature,\" Albright said about John. \"The goal is to get the Department of Juvenile Justice and the state of Florida to provide some additional assistance and counseling for him.\"

The school district sent the following statement to CNN in response to John's arrest:

\"It has been district procedure to invite students in to take the Florida Standards Assessment. The district would not invite someone to one of our campuses for the sole purpose to arrest. The district routinely assists students by providing services from our board certified behavioral analyst, licensed mental health counselors, school social workers, and psychologists.

\"As a team, these individuals develop interventions, conduct assessments, and offer support both at school and in the home in order to assist students and families.

\"The district is unable to provide specific information as to both current and past incidents regarding this or any other student due to educational laws and rules. It is our hope that we can continue to work with all families to help their students improve both behaviorally and academically.\"

Ann Abramowitz, a professor of psychology at Emory University in Atlanta, with no firsthand knowledge of the situation, said the sequence of events didn't provide her with enough information to comment on John's incident. However, various students with autism tend to benefit from certain types of carefully planned disciplinary strategies, compared to other types of discipline.

Those strategies include maintaining a calm and orderly environment, maintaining a schedule for the student, and preventing any outbursts of distress, anger or aggression, she said.

\"Keep kids engaged to prevent outbursts, because once outbursts occur, they can be very challenging to manage and can lead to situations where it exceeds the school's capacity to manage the behavior,\" Abramowitz said, adding that \"I can't really think where being put in handcuffs would be helpful to a child, and of course it just seems intuitively obvious that it could be traumatic.\"