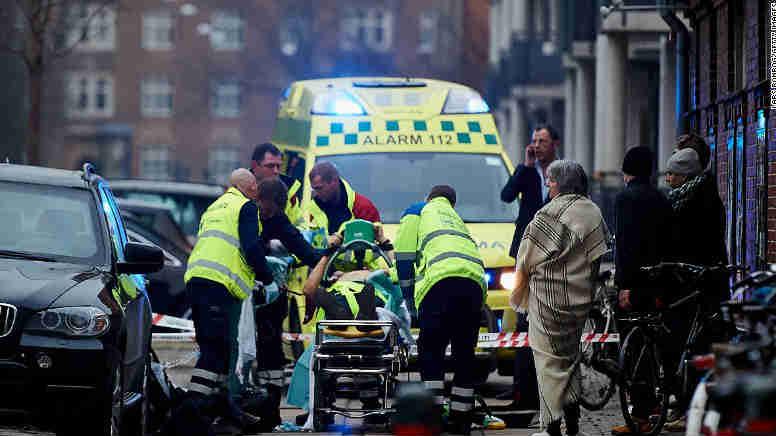 (CNN) Gunmen in Copenhagen, Denmark, stormed a building where controversial cartoonist Lars Vilks and his supporters had gathered Saturday, killing a man and wounding three police officers before driving away from the scene, police and witnesses said.

Helle Merete Brix -- the founder of the Lars Vilks Committee, created two years ago in support of the Swedish cartoonist whose portrayals of the Prophet Mohammed angered many in the Muslim world -- told CNN that security personnel on site moved her and others to safe areas once they realized a shooting had taken place.

She and Vilks ended up in a storage room together, holding hands, until police told them it was OK to come out.

\"We have never taken any chances,\" Brix said, referring to the heavy security from police, Danish intelligence services and Vilks' own security guards at this and other committee events. \"What we have so much been frightened would happen happened.\"

The attackers fled the scene in a dark Volkswagen Polo, according to Copenhagen police.

The 40-year-old man killed hasn't been identified. A police official did say that none of the three wounded police officers suffered serious injuries.

\"Everything points to ... the shooting in Oesterbro (being) a political assassination and therefore a terror attack,\" Danish Prime Minister Helle Thorning-Schmidt said.

Thorning-Schmidt vowed that \"all resources will be used to find (those responsible) and bring them before a judge\" for an attack she said filled her \"with deep anger.\"

\"We have some difficult days ahead,\" the Prime Minister said. \"... But in Denmark, we will never bow to violence.\"

'We were just hiding ... and hoping for the best'

About 30 people -- including Vilks and French Ambassador to Denmark Francois Zimeray, who tweeted later that he is \"still alive in the room\" -- went through airport-level security to get into Saturday's event at a theater building in what Brix described as a \"very peaceful area\" of the Danish capital.

But it didn't last long, with noise erupting just a few minutes in.

Dennis Meyhoff Brink, a satire researcher and Danish university professor, said he heard about 30 shots around 3:30 p.m. (9:30 a.m. ET) as well as someone yelling in a foreign language.

The attackers made it into the lobby but apparently got no farther, according to Brix, a journalist and literary critic. She recalled how one man there \"acted very quickly and courageously\" by pushing a woman down to the ground then putting himself on top of her so she wouldn't get shot.

At one point, two people came running into the meeting room -- one of them bleeding from the leg, after having apparently been shot -- to \"tell us to calm down,\" Brink said.

Sirens could be heard 10 to 15 minutes after the shots, at which point Brink said \"we started to feel more safe.\" The discussion on free speech even resumed, though eventually all those at the event were bused to a local police station.

A target since cartoon of Mohammed with dog's body

Danes in Copenhagen and beyond quickly got support from around the world, including from the mayor of Paris -- who just more than a month ago lived this same nightmare during the massacre at the offices of satirical magazine Charlie Hebdo in her city.

\"In the name of Parisians,\" Mayor Anne Hidalgo tweeted, \"I express my full support.\"

Like Charlie Hebdo editor Stephane \"Charb\" Charbonnier, Vilks was one of nine faces on a \"Most Wanted\" graphic published by al Qaeda's Inspire magazine for \"crimes against Islam.\" Others include a pair of Danish journalists who published 12 cartoons depicting Mohammed in the Jyllands-Posten newspaper; Florida pastor Terry Jones, who burned a Quran; and \"Satanic Verses\" author Salman Rushdie.

Because of that, Brix said, \"there's no doubt\" the Copenhagen event was targeted because of Vilks, who has \"not been able to live a normal life\" for years, according to the committee.

\"This is ... why we set up the committee: to support Mr. Vilks and support his right to freedom of speech,\" Brix said.

Vilks became a target after his 2007 cartoon depicting Mohammed with the body of a dog -- an animal that conservative Muslims consider unclean.

In a CNN interview later that year from his home in rural Sweden, Vilks said the drawing was calculated to elicit a reaction.

\"It should be possible to insult all religions in a democratic way,\" he said then. \"If you insult one (religion), then you should insult the other ones.\"