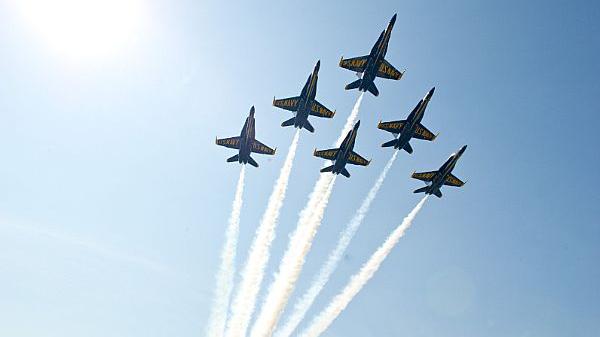 Harry Gill, the town manager in Smyrna just outside Nashville, said Thursday that the pilot was the only casualty. Some power outages were caused by the crash, but no civilians were hurt.

A U.S. official says the pilot was identified as Marine Capt. Jeff Kuss. The official was not authorized to discuss the matter publicly and spoke on condition of anonymity.

The Navy says the pilot was beginning to take off during an afternoon practice session when the crash happened. Five other F/A-18 jets landed safely moments later.

According to family members, Captain Kuss died in the crash. He is married with two young children and is a native of Durango, Colorado. Jeff joined the Blue Angels in September 2014, WTVF reported.He has accumulated more than 1,400 flight hours and 175 carrier-arrested landings. His decorations include the Strike Flight Air Medal, the Navy and Marine Corps Achievement Medal, and various personal and unit awards.

Kuss was a native of Durango, Colorado, and was commissioned as a second lieutenant in the Marines in 2006. He had previously served in Afghanistan before joining the Blue Angels.

"It's hard to put into words right now, but it's beautiful that a person can live and die engaged in their life's pursuits," said his grandfather, Dolph Kuss, reached at his home in Durango. "This was his dream since he was a child, to be an aviator, a flier."

He choked back tears and said he was struggling to gather his thoughts.

"It's hard to celebrate someone's life in this way," he said. "It is certainly a shock. Everything in life has its dangers, I guess."

A witness told WTVF that all of a sudden one of the planes flew by very close, then took a nose toward the ground.

She said the explosion was very powerful and that it could be felt in the ground and in her car.

The elite acrobatics team was scheduled to perform at an air show this weekend. The Blue Angels will not participate in the air show, the Navy said in a statement.

Also Thursday, an Air Force Thunderbird jet crashed south of Colorado Springsjust after a flyover for a graduation of Air Force Academy cadets where President Barack Obama had spoken.