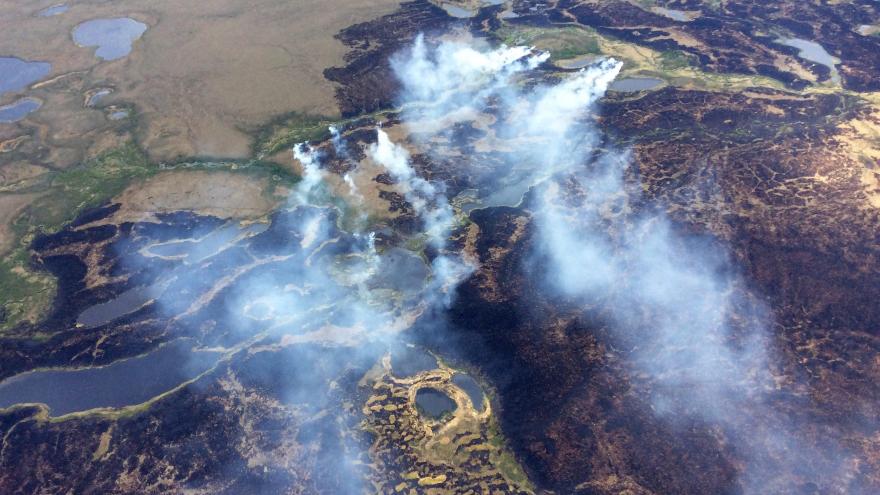 (CNN) -- As global temperatures rise, the once reliably frozen Arctic has seen a rash of massive wildfires in recent years.

And while biting winter cold and heavy snow are enough to eventually suppress most blazes, scientists say the right conditions can create fires that just will not die.

Like their undead namesakes, these so-called "zombie fires" are tough to kill.

Fed by fuel-rich soils in the Northern Hemisphere and subsisting on the meager oxygen available beneath the snow, zombie fires can smolder for months, long after flames above ground have been extinguished.

And sometimes, fires that have burned all winter long can ignite new blazes the following year after the snow has melted.

Sander Veraverbeke, an associate professor at Vrije Universiteit Amsterdam, first suspected this phenomenon was sparking wildfires several years ago. Scanning satellite images for an earlier study that examined the role of lightning in triggering Arctic fires, Veraverbeke said he noticed new fires were igniting near land that had burned the previous year.

"I saw that on the edges of the fire scars from the year before, flames were popping up again in spring and new forest fires were starting on the edge. And to me, that was really intriguing," he said.

Veraverbeke said that local fire managers confirmed that they too had observed fires that seemed to survive the winter.

Still, it was unclear how widespread these zombie fires were -- and whether they were becoming more frequent.

In a new study published Wednesday in the journal Nature, lead author Rebecca Scholten of Vrije Universiteit Amsterdam, along with Veraverbeke and other co-authors, attempt to answer these questions.

Overall, they found that zombie fires are responsible for just a fraction of the land burned by fire in most years.

However, they warn that they could become a force for firefighters to reckon with, as human-caused climate change loads the dice in favor of the hot, dry conditions that can trigger large wildfires.

"We will have more of these extreme fire seasons, which also means that we will likely have more zombie fires," Veraverbeke said. "So even though it's a relatively small percentage now, it's likely that it may become more in the future."

Using field observations and satellite monitoring, the study surveyed forests in Alaska and Canada's Northwest Territories during the years between 2002 and 2018.

During the years examined, the study found zombie fires were responsible for just 0.8% of the total land burned and 0.5% of the total carbon emissions released by fires in Alaska and the Northwest Territories.

However, there were some years when they made up a much more significant piece of the overall fire picture.

In 2007, 2008 and 2010, zombie fires were responsible for more than 5% of the land burned and carbon emissions generated by fires in Alaska. In 2008, a single zombie fire in Alaska scorched more than 33,000 acres as it simmered all winter, an area equal to 38% of the total land burned in the state by fires that year, the authors found.

Both regions are home to extensive boreal forests containing huge stocks of pine, spruce, fir and some deciduous tree species, as well as soils rich in the flammable mixture of decaying vegetation known as peat.

In addition to being a potent fuel for fires, the world's peatlands also store huge amounts of heat-trapping carbon. By some estimates, peatlands contain twice as much carbon as all the world's forests combined.

When peat burns, that carbon is released into the atmosphere, where it stays and contributes to global warming.

The researchers found that years that featured large fires and above-average temperatures were strongly correlated with a higher prevalence of zombie fires.

Zombie fires were observed during all six winters following the six hottest summers in the Northwest Territories, while none were observed after the seven coolest summers over the study time frame.

Since 2000, the Arctic has warmed more than twice as fast as the rest of the planet. Average temperatures in Alaska are now between 3 and 4 degrees Fahrenheit warmer than they were in the early 20th century.

And though these fires that can survive winter remain rare, the researchers argue that we should continue to monitor their occurrence, along with the other changes that are transforming these high-latitude forests.

"I think the sheer fact that this is happening really shows that this region is changing so, so quickly," Veraverbeke said. "it's really a testimony of the rapid warming in the Arctic and boreal (forests)."