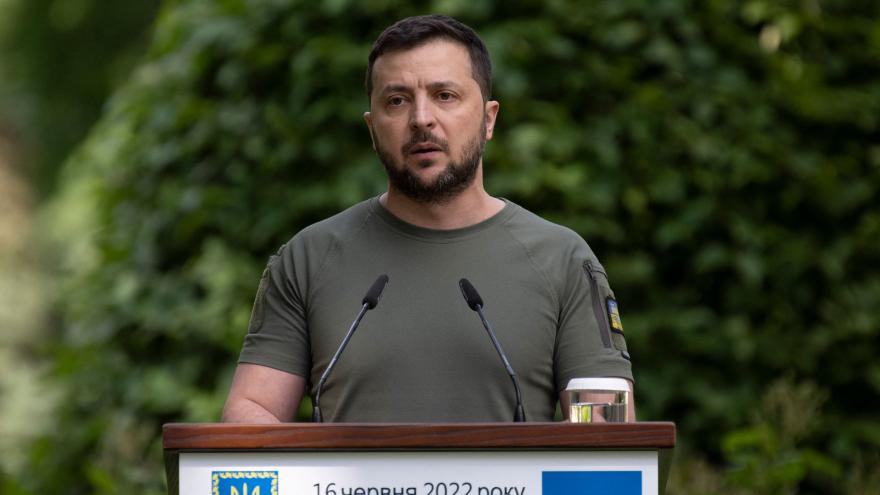 (CNN) -- Ukrainian President Volodymyr Zelensky will virtually address the G7 and NATO summits that are occurring over the coming week, senior US administration officials said, as he works to reinforce western support amid Russia's grinding invasion of his country.

The Ukraine war will loom over President Joe Biden's trip to Germany and Spain, where he will confer with a dozens of leaders. At the G7, the officials said, Biden will unveil steps alongside other leaders to increase pressure on Russia for its invasion. And at NATO, the US will announce measures to "strengthen European security, alongside expected major new contributions from allies," one official said.

Officials declined to detail what, if any, new sanctions the administration, in concert with G7 allies, would announce against Russia, but they acknowledged officials "expect Ukraine to be at the very front of conversations, and expect to roll out a concrete set of proposals to increase the pressure on Russia to support Ukraine during the course of the summit," while touting what they called already "unprecedented actions to our sanctions and export controls on Russia for its unjustified war against Ukraine," from G7 nations.

But officials did acknowledge that, with gas prices rising precipitously both at home and abroad, leaders participating will likely discuss the European Union's partial ban on Russian oil, and what they described as "a set of shared values around taking steps to reduce reliance on Russian energy," while still minimizing price impacts at home.

"I think we'll expect them to speak to, how can we take steps that further reduce Russia's energy revenues? And how do we do so in a way that stabilizes global energy markets and lessens the disruptions and pressures that we've seen?" the official told reporters Wednesday. "Again, that all goes back to those principles articulated at the very start with Russia's invasion: How do we maximize pain on Putin's regime? How do we minimize spill backs back to the rest of the world? And I think that's exactly how the discussion around energy markets and energy market challenges will get framed and discussed by leaders this weekend."

Yet Russia and Ukraine are not the only topics up for discussion; China has emerged as a key issue for the two groups, which have not traditionally focused on Beijing in their summits.

At last year's G7 summit in Cornwall, Biden pressed fellow leaders into inserting tough new language on human rights into a final communiqué, and the group had at-times heated conversations about their collective approach to China.

"I think it is fair to say last year marked an important watershed with respect to the G7, speaking for the first time to China's coercive economic practices," a senior administration official told reporters. "We expect that that is going to be if anything bigger a topic of conversation."

At NATO as well, leaders will include China for the first time in the final "strategic concept" document, particularly the long-term challenges China poses to European security. For the first time, the summit will include leaders from Asia, including from Australia, Japan, New Zealand and South Korea.

And at the G7, Biden will launch a global infrastructure partnership meant to advance low-and-middle income countries, another attempt to challenge China's reach.

At NATO, the applications by Sweden and Finland to join the alliance will be a principal topic of discussion. Turkey has thrown up roadblocks, which could be discussed on the summit's sidelines. A senior official said the US continues to "quickly" brining Sweden and Finland into the NATO alliance.