Zelensky says Ukraine will not give up territory for peace with Russia: 'This is our land' 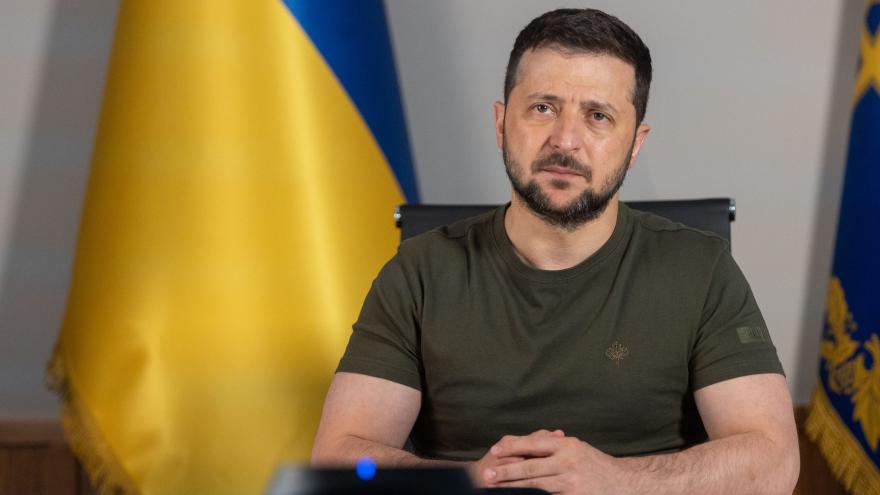 (CNN) -- Ukrainian President Volodymyr Zelensky told CNN's Wolf Blitzer on Thursday that Ukraine is unwilling to cede any of its land to Russia, standing firm that a concession of Ukrainian territory won't be part of any diplomatic negotiations to end the war.

"Ukrainians are not ready to give away their land, to accept that these territories belong to Russia. This is our land," Zelensky said in an exclusive interview aired Thursday on CNN's "The Situation Room."

"We always talk about that, and we are intending to prove it," he added.

Zelensky spoke to CNN at the same time as one of his top Western allies, British Prime Minister Boris Johnson, announced he would be resigning. Speaking in Ukrainian via a translator, Zelensky said he was confident that Britain's policy toward Ukraine "will not be changing" even if the country's leadership is in tumult.

"He resigned not because he was in Ukraine. I think on the contrary, what Johnson has been doing for Ukraine was helping us a great deal. I consider him a friend of Ukraine, but I think his society also supported Ukraine in Europe. That's why I think the UK, it's on the side of good, on the side of Ukraine," Zelensky said.

"And I'm sure the UK policy toward Ukraine is not ... changing because of Boris Johnson's resignation. Our relations obviously gained a lot from Boris Johnson's understanding of things. We went through a lot of dramatic moments quite quickly. The help we needed was delivered rather quickly ... if (his resignation) will affect this speed of help I don't know. I will pray to God it won't be affecting that help."

Russia's war with Ukraine has now lasted for more than four months, with no sign of either side backing down soon. Ukraine's early successes forced Russia to scale back its initial aims of toppling Kyiv, and Moscow's forces have now focused on taking territory in eastern Ukraine. Russian forces have now occupied most of the Luhansk region, outside of a few pockets of resistance, and are pressing toward cities in Donetsk.

CNN reported last week that White House officials are losing confidence Ukraine will ever be able to take back all of the land it has lost to Russia since the war began, even with the aid of heavier and more sophisticated weaponry that the US and its allies plan to provide Kyiv.

Zelensky acknowledged that Russia controls "almost all the Luhansk region," saying that his forces are now "fighting on the outskirts of this region." He said that Kyiv retreated to avoid mass losses of troops.

"I don't even understand what exactly they're controlling there. They ruined towns, school. They are the occupiers of the rubble?" Zelensky said.

Zelensky said that he was happy that Sweden and Finland were being accepted as NATO members, even though the Western military alliance has long resisted accepting Ukraine as a member.

"It's not superficial, but deep understanding of the risks for these countries because of the aggressive attitude of Russia to sovereign countries," Zelensky said. "That's why we fully support their membership. The whole world is helping Ukraine, some doing humanitarian aid, some financial or military aid, both houses in the United States support us.

"The world is doing a lot, but it could have been easier -- Ukraine could have been accepted as a NATO member. It would be much more straightforward than people imagine."

Still, Zelensky expressed gratitude for the military support that Ukraine has received from the United States, which has provided weapons with greater capability as the war has dragged on, while urging the West to continue providing military support to help Ukraine keep up its fight.

"(The) United States are helping Ukraine, helping a lot, but it's not enough in order to win. I hope my trust will speed up this help to Ukraine," Zelensky said. "We want the increment of this help -- we're fighting for our land, we don't want people from different countries fight for our territory. But the US are a world economy and can help us with both arms and finances.

"And also, the US can influence the decisions of the European countries -- this is also the political support. I have to be honest, some countries in Europe want a balance between Russia and Ukraine. But owing to the US help they started supporting us. So, when I talk about the volume and speed of the arms support, I'm not appealing only (to) the United States, I appeal to all the world leaders and saying that the faster help, the increment of help, will save the lives of Ukrainians and help us to regain territories occupied by Russia."

Asked whether the war could be over before the end of the year, Zelensky said, "Our country will stay united and unified. If the powerful weaponry from our partners will be coming to us on-time, and if good luck and God will be on our side, we can achieve a lot of things before the end of the year and we can stop this war. We can stop the military part, at least, of this war."

Zelensky also reiterated his call for US President Joe Biden to visit Kyiv, saying it would send a message to Russia and the world.

"We would love to see President Biden in Ukraine. I heard that he supported the idea. There are some security moments, which stand in the way of his visit, we understand that," Zelensky said. "I truly think this would help the Ukrainians. Ukrainians support (the) United States, the trust of the Ukrainians to the United States is very high, same as to the UK and Poland and the Baltic states.

"So, visits of the world leaders who are not just partners but real friends -- they give a signal, a sign, that the United States support Ukraine because they believe in Ukrainian victory and are not afraid of Russia. They come despite the rockets flying in. They are not afraid of Putin because the world is much bigger than one leader of one country."