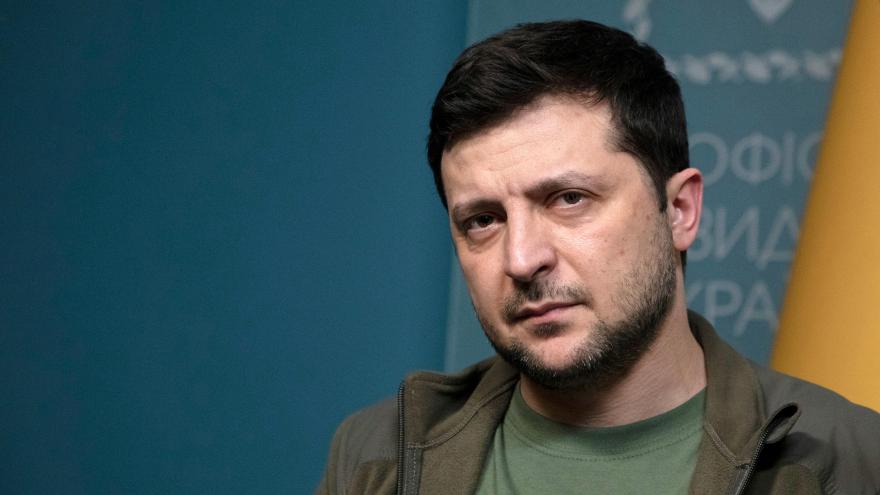 By Suzanne Malveaux, Jeff Zeleny, Kevin Liptak and Veronica Stracqualursi, (CNN) -- Ukrainian President Volodymyr Zelensky told US lawmakers Saturday that his country urgently needs more assistance from the US, including the establishment of a no-fly zone over Ukraine, as it fights against Russia's invasion.

During an hourlong Zoom meeting Saturday morning with members of Congress, Zelensky thanked the US for the support it has delivered so far, but called for more military support and greater sanctions on Russia, including on energy, according to a person familiar with the session.

His message was delivered amid ongoing conversations between the US and European allies about the possibility of providing Ukraine with fighter jet aircrafts from Eastern European countries, five sources familiar with the discussions told CNN.

Officials say there is a divide among countries about whether or not individual nations should provide Ukraine aircraft, given the associated risks. The US and NATO oppose creating a no-fly zone in Ukraine -- such a move, they have warned, could lead to "full-fledged war in Europe." Russian President Vladimir Putin said Saturday that countries that impose such a no-fly zone would be considered to be participating in the conflict.

On the call with US lawmakers, Zelensky encouraged Eastern European nations to provide Ukraine with planes, stressing that they were needed to defend against Russian aggression. He said that if Western nations won't impose a no-fly zone, they should give Ukraine planes.

Some Biden administration officials privately fear that this could be viewed by the Russians as escalatory, US officials say. But ultimately the decision is ultimately up to the individual countries to decide, the Pentagon said on Friday.

"These are considerations that sovereign nation states have to make on their own, and through their own processes," Pentagon spokesperson John Kirby said Friday when asked if the US would support countries sending MiG29s to Ukraine.

Following the call, Senate Majority Leader Chuck Schumer said Zelensky had "made a desperate plea for Eastern European countries to provide Russian-made planes to Ukraine. These planes are very much needed."

"And I will do all I can to help the administration to facilitate their transfer," the New York Democrat said.

Republican Sen. Ben Sasse of Nebraska voiced his opposition to a no-fly zone in a statement after the call, saying the situation could "spiral out of control quickly." But he also urged the US to send more air power.

Zelensky advocated banning Russian oil imports and suspending all commercial transactions, like Visa and Mastercard, a senator on the call told CNN.

The Ukrainian leader urged the US to revoke "most favored nation" status for Russia on trade and argued that "stopping the purchase of Russian oil and gas around the world would be one of the most powerful sanctions possible, 'even more powerful than SWIFT,'" according to Republican Sen. Dan Sullivan of Alaska.

The US, Canada, and European allies previously announced that they would expel certain Russian banks from SWIFT, the high-security network that connects thousands of financial institutions around the world.

Zelensky also provided a status of on-the-ground conditions in his nation, according to participants in Saturday's meeting. He described how the Russian soldiers the Ukrainians have captured are often unaware of the real conditions in Ukraine and that they were fighting a war of hostility, according to a senator on the call.

In recapping the meeting, Sen. Lindsey Graham said that Zelensky also provided "numerous examples of war crimes" committed by Russia, and that there are "wholesale attacks on civilian targets, random, indiscriminate" happening in Ukraine.

The South Carolina Republican said Zelensky "indicated that labeling President Putin a war criminal is the right thing to do and he thinks would help tremendously."

After hearing from the Ukrainian leader, several senators took to Twitter to express their support for him and his country. South Dakota's John Thune, the No. 2 Republican in the Senate, praised Zelensky for his "inspiring bravery and resolve while under attack, just like his fellow countrymen." Thune said the US stands with Ukraine and "must help keep them in the fight while leading the free world against Putin's war of conquest."

At the end of the call, dozens of lawmakers unmuted to thank Zelensky and voice their support, with some saying "Slava Ukraini" -- or Glory to Ukraine -- according to a person who was on the call. The Ukrainian president was clearly moved by the gesture, the person added.

Since Russia launched a full scale invasion into Ukraine on February 24, the US has slapped several sweeping sanctions on Moscow, including on Putin himself. President Joe Biden recently authorized $350 million in new US military assistance to Ukraine.

As Russia continues its advance on Ukraine, the White House this week asked lawmakers to approve $10 billion in lethal and humanitarian aid for Ukraine as part of a $32.5 billion emergency funding request sent to Capitol Hill.