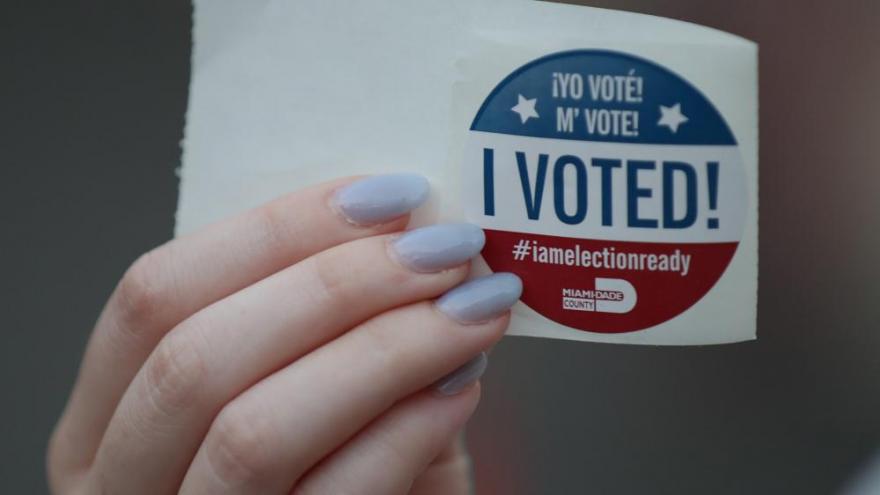 Motivated in part by the Covid-19 death toll, the death of Supreme Court Justice Ruth Bader Ginsberg and what organizers describe as the urgency of the 2020 election, organizations including Rock the Vote, NextGen America and When We All Vote and companies such as Snapchat broke records with their voter engagement initiatives on Tuesday.

"The engagement we saw on National Voter Registration Day is really encouraging," Carolyn DeWitt, president of Rock the Vote, told CNN. "Young people understand the gravity of this moment, we have seen them leading the charge on our streets and are translating and carrying that momentum into this election. But, we still have work to do to ensure voters, especially young voters have the information they need to vote in this unusual year and cast an informed ballot electing leaders with their values at every level of government."

According to When We All Vote, former first lady Michelle Obama's nonpartisan voter engagement organization, more than 82,000 voters started or completed the registration process with When We All Vote since Saturday.

On Tuesday alone, 44,000 voters started or completed registration and more than 300,000 people visited the resources on When We All Vote's website. Volunteers with the organization texted more than 500,000 voters and students with information about voting.

For comparison, during two previous live events over the summer, When We All Vote -- which was started just ahead of the 2018 midterms -- hosted events that had 19,000 and 35,000 people start or complete voter registrations on their site.

When We All Vote also hosted a series of virtual events in celebration of the day including Obama's debut on Instagram Live. More than 1 million viewers engaged in When We All Vote's Instagram Live event Tuesday during which Obama spoke with Jennifer Lopez, actress Zendaya, actress Ayesha Curry and basketball player Chris Paul to energize young voters.

"We're seeing record interest from Gen Z in this election," Sofia Gross, public policy manager for Snap, told CNN. "We have already helped close to 900,000 Snapchatters register to vote through our app in 2020, more than double what we did in 2018. Historically, young people haven't 'shown up' in part because voting processes have never been built for them. We want to change that -- and believe our native-to-mobile tools will help Gen Z not just register in historic numbers, but actually turn out."

NextGen America, the progressive youth voter engagement organization founded by businessman Tom Steyer, contacted 1.3 Million Americans with 548,702 calls and 738,523 texts Tuesday, which was a dramatic increase from outreach done in prior years. NextGen shifted their operation to an entirely digital model as a result of the Covid-19 pandemic, bringing them greater reach.

While NextGen America started organizing and getting out the vote on campuses across the country in 2013, their work was previously almost all in-person.

"We were your friendly campus tablers," Heather Greven, communications director at NextGen America, said. While NextGen made no calls and 11,000 texts on National Voter Registration Day ahead of the 2018 midterms, they registered 7,345 voters as a result of in person outreach.

"The progressive grassroots energy is palpable, more so than in 2018's blue wave and the 2008 election of Barack Obama," Ben Wessel, executive director of NextGen America, told CNN.

NextGen also partnered with Crooked Media's Vote Save America initiative, through which 42,000 people verified their registration or registered through the Vote Save America registration tool. In addition, nearly $1 million was raised for Register2Vote through Crooked Media's Every Last Vote Fund. Register2Vote helps to register voters in battleground states.

Outvote, a political digital organizing company that provides outreach tools to progressive and non-partisan organizations including When We All Vote, held a day of action on Tuesday during which celebrities and influencers including actress Alyson Stoner and YouTube personality Aja Dang spoke with a number of activists on Instagram Live to recruit young voters.

Outvote, which was founded in 2018, held its first day of action on Tuesday and helped more than 15,000 people check their registration or register, the group told CNN.

"One of the many reasons we sought partnerships with creators was their extraordinary understanding of internet dialogues and audience reach. Unlike the usual politicos and celebrity activists, the creators from our Day of Action know how to speak to their attentive listeners in a breadth of verticals," Emily DaSilva, COO of Outvote, told CNN.