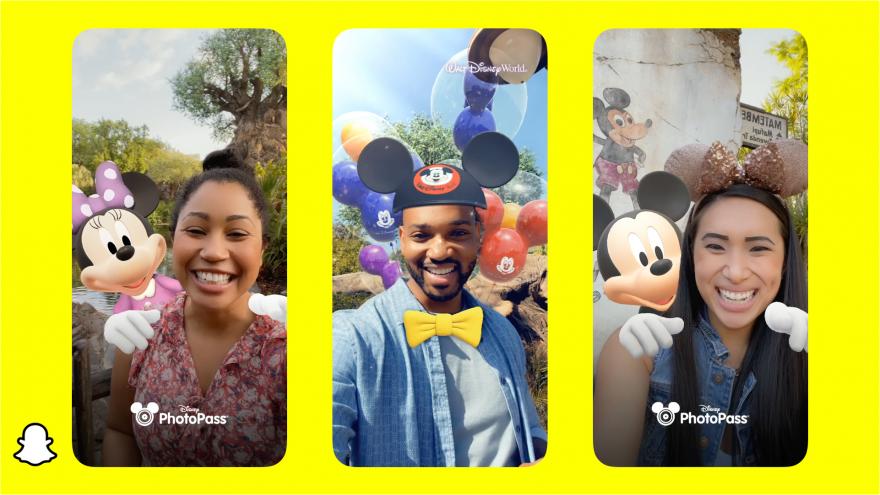 (CNN) -- Have you ever wanted to take a photo with Mickey Mouse whenever you want? How about adorning Magic Kingdom's Cinderella Castle with your family photos? A new partnership between Disney and Snap will make that possible.

Disney Parks and Snap announced Thursday that they're teaming up to bring augmented reality to the Walt Disney World resort in Orlando, Florida with new Snap lenses. The move is yet another step in Disney's efforts to modernize its lucrative parks division by creating a "metaverse" that connects the digital with the physical.

So what does such a partnership actually look like?

According to Snap and Disney, guests will be able to "transform Cinderella Castle with augmented reality," using the My Disney Experience, an app that helps guests manage their vacation. Park goers also can add the AR tech to their photos and videos via Snapchat. That means users can take pictures holding virtual Disney park balloons or wearing Mickey Mouse ears." You can can even get a digital Mickey Mouse to pop up in your photos and give you a hug.

The new lenses will be available to Snapchat users starting Thursday and will be exclusive to Disney World on June 3 in advance the resort's 50th anniversary this fall.

"With the My Disney Experience app, you'll be able to place your favorite image captured by Disney PhotoPass photographers on the iconic castle with augmented reality," Disney Parks wrote in a blog post on Thursday. "Look through your camera lens in the app and you'll see a beautiful mosaic of special moments shared by our guests to celebrate the 50th."

Adding augmented Mickey Mouse ears to your photos may seem like an incremental move, but it's an important addition to Disney parks, which are coming off a rough year after the Covid-19 pandemic shut down the company's global properties for months.

Now, parks including Disneyland in California are reopening their gates, and those behind the scenes like Gary Daniels, vice president of Disney's digital experience, are thinking about what the parks of the future will be.

"How do we take these really rich, deep stories and environments and do more with them? We don't want to be constrained just by the physical brick and mortar," Daniels told CNN Business. "We just have so many tools in our toolbox now. When you look at things like [AR], we're going to be able to just connect and engage guests in very different, incremental ways."

So does that mean guests can expect AR to become a larger part of the Disney Parks experience? Could the Magic Kingdom or EPCOT or California Adventure employ emerging tech to become a living digital game as well as a physical park?

"We kind of see the possibilities as really limitless on this one," Daniels said.

Integrating exclusive Snap lenses and AR into the parks can also help Disney bond with younger guests, creating a connection that them into life long consumers.

"Generations of families have gone to Disney Parks around the world and been able to have these really magical, unforgettable experiences," Ben Schwerin, Snap's senior vice president of content and partnerships, told CNN Business. "And now you have a generation of young people who've grown up with smartphones in their pocket and cameras that are connected to the internet."

Schwerin added, "young people are at the park and they want to use their phones that use Snapchat to capture memories and share them with their friends."

Josh D'Amaro, the chairman of Disney Parks, told CNN Business in April that the so-called "metaverse" is an opportunity to bring the assets of the park into "a digital framework" and expand their impact.

The parks have built deeply immersive attractions like Star Wars: Galaxy's Edge and Marvel's Avengers Campus. The partnership with Snap is another aspect of that strategy, but on a more micro and personal level.