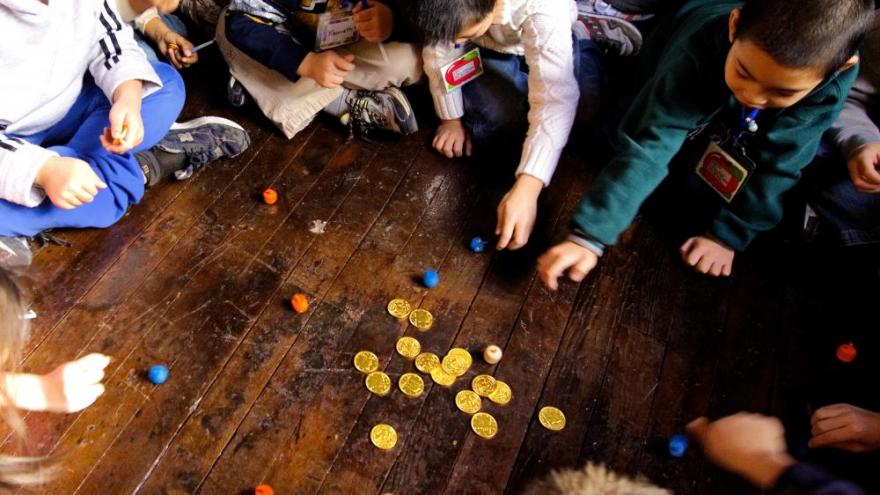 (CNN) -- Despite what some holiday movies will have you believe, Hanukkah is not the Jewish equivalent of Christmas, nor is it an insurmountably difficult holiday to learn about. If you're curious, here are a few basic questions many non-Jews (and even some Jews!) have about the holiday:

All right, so it's not "Jewish Christmas." Then what is it?

Hanukkah celebrates the rededication of the Second Temple in Jerusalem in the 160s BC. After outlawing the Jewish religion and Jewish practices, then-King Antiochus IV decreed that Jews must worship Greek gods in the Temple. Eventually, Jewish priest Mattahias, his son Judah Maccabee, and their army (creatively called The Maccabees) revolted, ultimately forcing Antiochus IV out of Judea. Maccabee and his followers reclaimed the Temple and rebuilt the altar.

You may have heard Hanukkah referred to as "The Festival of Lights" and might already be familiar with a menorah. Menorahs have long been a symbol used in Judaism, and when the altar was rebuilt by Maccabee and co., part of that included relighting the menorahs. The soldiers only had enough oil to light the menorah for a single night, but the story goes that the little bit of oil lasted for eight full nights. Thus: the Miracle of Hanukkah. That's why the celebration lasts eight nights.

Although most people use the word menorah in the context of Hanukkah, what observers are actually lighting is called a hanukkiah (ha-noo-kee-ah). It looks very similar to a menorah with eight prongs, but has a ninth candle, the Shamash, used to light the other candles.

What are some other ways to observe the holiday?

Many modern Jewish families celebrate by lighting the hanukkiah. One candle per night of Hanukkah is lit, like Hebrew is read, from right to left. People might also play dreidel games and eat certain foods like sufganiyot (similar to jelly donuts) and latkes (fried potato pancakes). Both foods are fried in oil, commemorative of the miracle of the Maccabees' long-burning oil.

Important note: There is an ongoing and spirited debate about whether latkes are best served with applesauce or sour cream. The correct answer is both, in my humble opinion.

Of course, there is also the time-honored tradition of watching "The Rugrats Chanukah" --an enjoyable cinematic experience for all ages.

What is a dreidel and why is it played on Hanukkah?

A dreidel is a four-sided spinning top with Hebrew letters (Hay, Gimel, Nun and Shin) on each surface signifying the rules of the game. When Antiochus IV was in power, all Jewish practices were outlawed, including reading and studying the sacred Jewish text, the Torah. When soldiers would come through Jewish communities, those studying the Torah in secret would pretend to play the dreidel game so as not to be caught and arrested. Want to play? Here's a rundown of the game.

Is Hanukkah the most important Jewish holiday?

Ask any Rabbi and you'll get a resounding "no." While it is celebrating a miracle, there are much more sacred holidays in Judaism. Often referred to as the High Holy Days, Rosh Hashanah (Jewish New Year) and Yom Kippur (Day of Atonement) both in the fall, are considered two of the most sacred holidays.

Then why do people make such a big deal out of it?

While for centuries many Jews have observed Hanukkah by lighting the hanukkiah, saying certain prayers, and eating certain foods, the all-out Hanukkah celebrations Americans are used to is a relatively new phenomenon.

The simplest answer: It occurs roughly around Christmas, and companies are only too thrilled to capitalize on the timing. Many of the newest customs are tongue-in-cheek concepts that directly poke fun at how much Hanukkah has been commodified to look like a "Jewish Christmas." (See: Mensch on a Bench -- a take on the loved by kids, loathed by parents Elf on the Shelf -- and the Hanukkah spin on the ubiquitous ugly Christmas sweater craze).

Since Christmas is generally accepted as an important and universal experience in American childhood, kids of other faiths often feel left out of the celebrations. Due to the coincidental timing of Christmas and Hanukkah, some Jewish families participate in present exchanges and decorating.

Why do the dates of Hanukkah change every year?

The dates of Jewish holidays are determined by the ancient Hebrew (or Jewish) calendar as opposed to the Gregorian calendar that was introduced in 1582 by Pope Gregory XIII, with which you are most familiar. The Hebrew calendar is based on a lunar cycle. So, while Hanukkah starts on the same day every year on the Hebrew calendar (25 Kislev), it doesn't sync perfectly with the Gregorian calendar, so it has a "different" date each year. It tends to fall somewhere between late November and late December.

Why are there so many different ways to spell Hanukkah and which one is right?

The word Hanukkah is actually a transliteration and not a direct translation of the Hebrew word for dedication, so there will never be a perfect English spelling. Merriam-Webster' uses the spelling "Hanukkah," but "Chanukah" is also widely accepted.