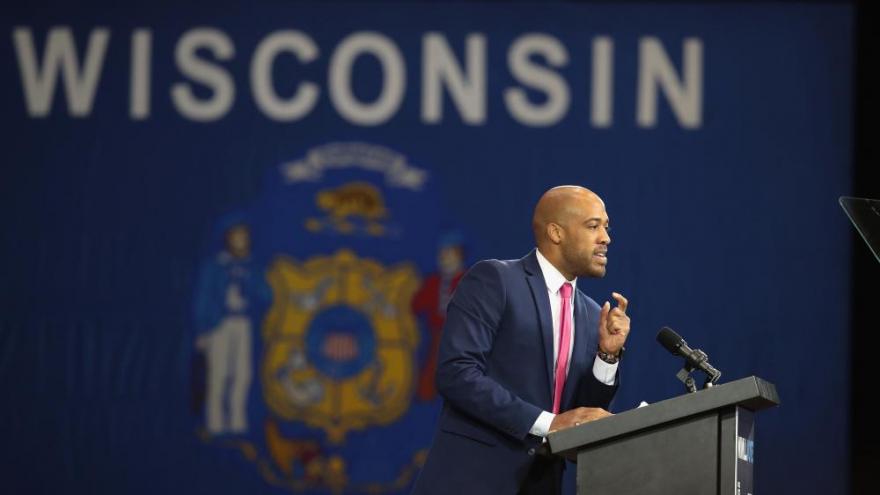 Democratic candidate for Lt. governor of Wisconsin Mandela Barnes speaks at a rally for Wisconsiin Democrats at North Division High School on October 26, 2018 in Milwaukee, Wisconsin.

(CNN) -- When Mandela Barnes learned that police officers in Kenosha, Wisconsin, shot an unarmed black man, he reacted not just as the highest-ranking black official in the state, but as a young black man who has seen this story repeated too many times to count.

"You have to got to be kidding me," he wrote on his personal Twitter page.

The direct eight-word response highlights Barnes' relevance in this moment: As a 33-year old Democratic lieutenant governor, he is both politically and generationally more in-line with the activists leading the latest round of protests sparked by the killing of George Floyd in May and brought them back with a force after the shooting of Jacob Blake last week in Southeast Wisconsin.

Some elected officials have struggled amid the country's reckoning with race. But Barnes, the first Black man to be elected statewide in Wisconsin, has forcefully stepped into the social and political movement, decrying President Donald Trump -- labeling him as an "incendiary" figure aimed solely at "creating more division" -- for planning to visit Kenosha on Tuesday and personalizing the need for coherent statewide leadership at this moment.

"The crazy part is there are a lot of people who are in office who are just finding out that this stuff is a problem," Barnes said in an interview with CNN. His background "can be an added stress, but I think ultimately, just given the organizing background, still being relatively young and having been very close to a lot of experiences that people are dealing with, if not directly dealing with them, I think ultimately helps me."

Barnes added: "I do feel like emotionally, I take on probably a little bit more than other people in similar offices."

Barnes, an only child, credits much of his focus on politics -- and success he has had so far -- on his politically active parents. His mother, a teacher, and his father, an auto worker, were both active in their respective unions.

Barnes -- named after South African revolutionary and president Nelson Mandela -- began his career as an activist for M.I.C.A.H., a Milwaukee-based group advocating for social justice. He first ran for office in 2012 at the age of 25, defeating a Democratic incumbent in the party's primary and becoming a Wisconsin state assembly member representing the north side of Milwaukee.

After a few years serving in the Wisconsin assembly, he tried but failed to primary Lena Taylor, a Democratic state senator in 2016. The race created some bad blood between Barnes and those on Taylor's side in Milwaukee, some of which continues to fester to this day.

Two years later, Barnes then secured his party's nomination for lieutenant governor in 2018 in a landslide, winning the support of a broad coalition of Democratic organizations and winning over former rivals like Taylor, who endorsed him in the bid.

"I think it means something to young people to look and see themselves (in office)," said Taylor. "Just him literally being there matters."

But, Taylor said, with that position comes responsibility, and while she backed his campaign, she still believes Barnes "could do more" in the position.

Throughout that political rise, Barnes has been attacked in often charged racial terms, most notably in 2018 when then-Wisconsin Lt. Gov. Rebecca Kleefisch falsely alleged the Barnes knelt during the playing of the National Anthem, an attempt to play into racial tension around anthem protests. Kleefisch later backed off her claim, saying she heard it from someone else.

Barnes has run on his relative youth throughout his career, with multiple operatives who have worked with the lieutenant governor telling CNN that one of their best rhetorical weapons was just letting Barnes be conversational when responding to Republican attacks.

So, when Barnes was asked to respond to Kleefisch backing away from the claims, he did so as only a young politician could do: He quoted Rihanna.

"Don't tell me you're sorry cause you're not," Barnes said. "You're only sorry you got caught."

'This is a pattern of violence'

Barnes has shown throughout the fallout to the Blake shooting that, unlike other politicians thrust into high profile scenarios involving police, he is comfortable identifying with the protestors in the streets.

The "investigation is ongoing, but we don't need an investigation to know that Blake's shooting falls in a long and painful pattern of violence. This is a pattern of violence that happens against Black lives too often and across the country," Barnes said at a press conference on Thursday. "People are out there because they want to save this nation, they want to correct the mistake that have been made over time, many mistakes have been made before most if not every protester was ever born."

And then Barnes delivered a warning: "If we fail to correct the mistakes ... what we are dealing with now is nothing compared to what we will deal with down the line."

That ability to talk about issues of race and policing with familiarity was clear last week when, meeting in their locker room before a playoff game, the Milwaukee Bucks decided to go on strike because of the Blake shooting, setting off a cascade of strikes and postponements in the sports world.

The Bucks are owned by billionaire Mark Lasry, one of the biggest donors to Democratic causes in the country. Alex Lasry, Mark's son and a top official with the team, connected the striking players with both Barnes and Wisconsin Attorney General Josh Kaul.

As they spoke from the Bucks locker room in Orlando, where the NBA playoffs are being played, Barnes answered the players' questions and told them about what tangible steps could be taken to tackle issues of police brutality in Wisconsin and nationwide.

According to Alex Lasry, the players asked Barnes and Kaul for concrete steps they could call in the wake of their now closely watched protest. Barnes, Lasry said, bluntly told the players that he and the governor could put forth plans, but it was up to the Republican-controlled legislature -- a body that has not met in months -- to turn their plans into law.

"These dudes were genuinely interested in what they could do," Barnes said. "They didn't want to just walk off the court and that be it. So they asked, 'What all has changed in the last several months since the George Floyd protests? What can we do? What needs to happen?'"

Minutes later, led by guards Sterling Brown and George Hill, the Bucks issued a joint statement that specifically called for "the Wisconsin State Legislature to reconvene after months of inaction and take up meaningful measures to address issues of police accountability, brutality and criminal justice reform."

"Mandela is a trailblazing force right now in Wisconsin," said Alex Lasry after the call. "When you look at this moment, to be able to have a person like Mandela in the highest rankings of Wisconsin government, I think it lends an important voice and quite frankly, a different voice, than you have traditionally seen in Wisconsin politics."

A difference in style

Barnes is well aware of his uniqueness as the first statewide elected official and has used it as a way to both set himself apart from primary opponents and lightheartedly contrast himself to the man he ran alongside: Wisconsin Gov. Tony Evers.

Evers is White and, at 68 years old, is 35 years older than his outspoken partner, something the duo regularly joked about on the campaign trail.

"He's my sitcom co-star, the other half to my odd couple," Evers said on the night they both won. "And most importantly, he reduced our ticket's average age by about 20 years."

Barnes and Evers' differences, which go beyond their age and race, are more about style than substance. The two agree on most issues, but approach things -- especially in the way they communicate them -- in notably different ways.

At a press conference last week, for example, Evers' took a measured tone in addressing the violence in Kenosha, only getting worked up when asked about reports that Blake has been handcuffed to his hospital bed in the wake of his shooting.

"Hell yes," Evers said when asked if that bothered him.

Barnes more clearly showed his emotion, and the lieutenant governor attempted to put what happened in Kenosha into the broader conversation on police brutality and systemic racism.

"Leaders at every level ... everybody has to recognize the pain of those who are protesting and have to do everything to work to ... end systemic racism and the systemic violence that happens every day in this city, in the state, in the country, all over," Barnes said.

Barnes was also more outspoken during the 2018 campaign, suggesting that Trump was looking to create a "superior race," Republicans in the state were trying to use "the most racially excitable things" against him and former Republican Gov. Scott Walker, the incumbent, was ignoring "people who look like me."

"It's about talking in a way that people can understand what I'm saying," Barnes told CNN of his directness during the campaign. "I hate when people are still left with questions after I try to explain something and I'm trying to think of the thing."

And even though it sometimes puts increased scrutiny on Barnes, his directness is a trait that people close to the lieutenant governor admire.

"There are moments in public life where the careful, the more diplomatic, statement to an event is appropriate. ... And then sometimes there is a time where you just have to put your heart out there," said State Rep. Dan Riemer, a Barnes friend.

"In politics, the inclination is to be cautious about what you say," said Riemer. "But I think sometimes just keeping it real is what you need from a leader. And Mandela ... definitely keeps it real."