You might remember Russel Honoré for his response to Hurricane Katrina. Now he'll assess US Capitol security 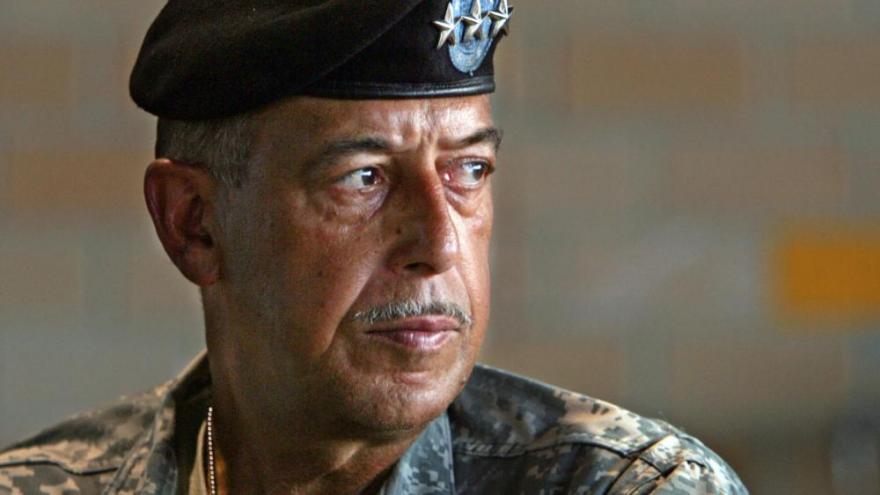 Lt. General Russel Honore listens to a Hurricane Katrina disaster briefing during a stop over in New Orleans, on Friday, September 9, 2005.

(CNN) -- The review of US Capitol security in the wake of this month's riots will be handled by retired Lt. Gen. Russel Honoré, the widely praised former commander of the First Army who became a household name as he coordinated relief efforts in New Orleans after Hurricane Katrina.

Over the course of his career, the general came to be known as a no-nonsense leader, a quality perhaps best exemplified in his slogan, "Don't get stuck on stupid."

In a statement Friday, House Speaker Nancy Pelosi said Honoré would lead the review of the Capitol's security infrastructure and interagency process, calling him a "respected leader with experience dealing with crises."

Louisiana Gov. Jon Bel Edwards praised the news on Twitter, writing that Honoré was "a great choice" for the job. "He has and will serve our nation well," the governor said.

He's led the response to many disasters

Hailing from Lakeland, Louisiana, Honoré was commissioned as a second lieutenant of the infantry in 1971 upon graduating with a degree in vocational agriculture from Southern University and A&M College.

Honoré served in a variety of infantry command positions throughout his career and took command of the First Army based at Fort Gillem outside Atlanta. He also served as the vice director for operations, J-3, The Joint Staff, Pelosi noted, focusing on military support to civil authorities.

Before the fateful 2005 hurricane season, Honoré had helped coordinate US response to flooding in Venezuela in 1999 and Mozambique in 2000, according to his website.

He also oversaw the military's response to the space shuttle Columbia disaster and the sniper shootings in the Washington, DC, area in 2002, the biography says.

Praised for leadership after Katrina

But Honoré commanded the nation's attention in 2005 when he led the Defense Department's response to Hurricane Katrina and Hurricane Rita.

Thousands of troops were deployed to New Orleans, where government relief efforts had been widely criticized. But it was Honoré, the leader of Joint Task Force Katrina, who was credited with recalibrating the military's role, transforming troops into first responders.

He told everyone he saw to point their weapons down, reminding National Guardsmen and New Orleans police officers that they were not deployed to Iraq, according to CNN's Barbara Starr, who was embedded with Honoré.

At the time, in an interview with a local radio station, then-Mayor Ray Nagin called Honoré a "John Wayne dude" who could get things done.

"He came off the doggone chopper and he started cussing and people started moving," Nagin said.

At one point, he helped rescue twin babies, walking with the family to a Navy ship where they were clothed and bathed after days without food.

The mother, Alexandra Wheeler, told CNN she credited Honoré with saving her twins' lives. Wheeler and Honoré met again in 2017 and Wheeler told the retired general, "We are eternally grateful to you for that."

Honoré retired in 2008 after 37 years of active service, according to his website. In the years since, he's often appeared on television to discuss officials' responses to natural disasters.

According to his website, Honoré has also formed the GreenARMY, a coalition of community and environmental groups that works to address environmental issues in Louisiana.