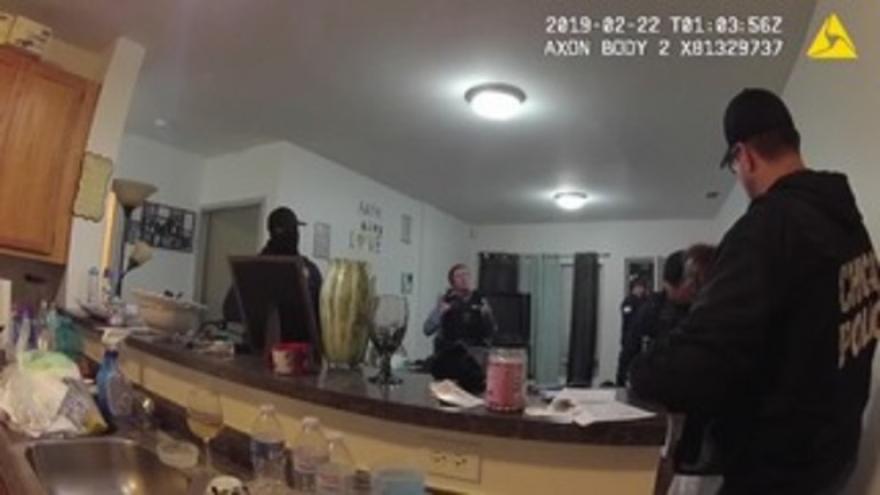 CHICAGO, IL (WBBM) -- For the first time, police body camera video reveals what an innocent woman said happened to her nearly two years ago: police officers wrongly entered her home with guns drawn and handcuffed her naked as she watched in horror.

Young recently obtained the footage after a court forced CPD to turn it over as part of her lawsuit against police.

“I feel like they didn’t want us to have this video because they knew how bad it was,” Young said. “They knew they had done something wrong. They knew that the way they treated me was not right.”

Hours before the TV version of this report broadcast, the city’s lawyers attempted to stop CBS 2 from airing the video by filing an emergency motion in federal court.

The video reveals on Feb. 21, 2019, nine body cameras rolled as a group of male officers entered her home at 7 p.m. Not long before, the licensed social worker finished her shift at the hospital and had undressed in her bedroom.

That’s when she said she heard a loud, pounding noise.

Outside, officers repeatedly struck her door with a battering ram. From various angles, the video captured the moments they broke down the door and burst through her home.

“It was so traumatic to hear the thing that was hitting the door,” Young said, as she watched the video. “And it happened so fast, I didn’t have time to put on clothes.”

As they rushed inside with guns drawn, officers yelled, “Police search warrant,” and “Hands up, hands up, hands up.” Seconds later, Young could be seen in the living room, shocked and completely naked, with her hands up.

Young looked terrified and confused as she watched officers search the home. An officer put her hands behind her back and handcuffed her as she stood naked.

And like so many other wrong raids CBS 2 uncovered, the one on Young’s home could have been avoided.

Using body camera video and police and court records, CBS 2 pieced together – moment by moment – not only how Young was treated during the raid, but also how police failed to check the bad tip that led them there.

Young recently agreed to an interview to discuss the body camera video after she first spoke to CBS 2 last year. CBS 2 blurred portions of the video in which Young was unclothed.

With her hands bound behind her back, the video shows an officer wrapped a short coat around her shoulders. But the coat only covered her shoulders and upper back – leaving her front completely exposed as she stood against the wall. Officers stood around her home – in the kitchen, the living room and the hallways – while she remained naked.

About two minutes after police entered the home, an officer found a blanket and wrapped it around Young as she sobbed and repeatedly asked officers who they were looking for.

“They just threw something over me, and my hands are behind me and I’m handcuffed,” Young said in an interview. “So there’s no way for me to secure the blanket around me.”

The blanket continued to slide open and expose her body. One video clip shows an officer stood in front of Young but made no attempt to cover her. Another officer walked over and held the blanket closed.

“Tell me what’s going on,” she cried in the video.

“There’s no one else who lives in this apartment?” the sergeant asked.

“No, no one else lives here,” Young said.

Young told police at least 43 times they were in the wrong home. She repeatedly asked them to allow her to get dressed and told them she believed they had bad information.

“Oh my God, this cannot be right,” Young said during the raid. “How is this legal?”

Police did have bad information, CBS 2 Investigators uncovered, and they failed to do basic checks to confirm whether they had the correct address before getting the search warrant approved.

According to CPD’s complaint for search warrant, one day before the raid, a confidential informant told the affiant – or lead officer on the raid – that he recently saw a 23-year-old man who was a known felon with gun and ammunition.

Despite no evidence in the complaint that police made efforts to independently verify the informant’s tip, such as conducting any surveillance or additional checks as required by policy, the search warrant was approved by an assistant state’s attorney and a judge.

But CBS 2 quickly found, through police and court records, the informant gave police the wrong address. The 23-year-old suspect police were looking for actually lived in the unit next door to Young at the time of the raid and had no connection to her.

CBS 2 also found police could have easily tracked the suspect’s location and where he really lived because at the time of the raid, he was wearing an electronic monitoring device.

“That piece of paper [search warrant] gives them the right to, you know, that says you can do X, Y, Z based on what’s on that paper,” Young said. “So if you get it wrong, you are taking 100 percent control of someone else’s life and treating them in a bad way.”

The body camera video also raises questions about the approval of the warrant. In one clip, officers in a squad car reviewed their notes and can be heard talking. CPD wouldn’t comment when CBS 2 asked what the conversation meant.

“It wasn’t initially approved or some crap,” one officer said.

“What does that mean?” the second officer asked.

“I have no idea,” the first officer said. “I mean, they told him it was approved, then I guess that person messed up on their end.”

Citing an ongoing investigation by the Civilian Office of Police Accountability (COPA), CPD also wouldn’t comment when CBS 2 asked about the raid or why officers acted solely on an informant’s tip.

But the video shows Young made multiple attempts to ask CPD some of those same questions.

“Who are you looking for?” Young asked.

“I’ve been living here for four years and nobody lives here but me,” she yelled.

“I’m telling you this is wrong,” Young continued. “I have nothing to do with whoever this person is you are looking for.”

This is not the first time police failed to do basic checks that would have contradicted bad information given by an informant. Last year, CBS 2 interviewed the Blassingame family who were wrongly raided by police in 2015. Jalonda Blassingame’s young sons said officers pointed guns at them, leaving them traumatized, like dozens of other children CBS 2 interviewed as part of its two-year investigative series.

“I felt scared for my life,” said her son Jaden, who was 10 at the time of the raid.

CBS 2 quickly found the suspect police were looking for had no connection to the Blassingames and had been in prison at the time of the raid for years.

That trauma experienced by innocent children and families as a result of wrong CPD raids was the subject of CBS 2’s half-hour documentary, “[un]warranted.” It also examines how Black and Latino families are disproportionately affected.

Young said the way officers treated and spoke to her during the raid amplified the trauma she experienced. The video shows she was visibly upset and afraid as she asked police questions, but did not immediately receive any answers about why officers were there.

“I don’t have to shout?” Young yelled. “This is f****** ridiculous. You’ve got me in handcuffs. I’m naked, and you kicked my house in. I keep telling you, you’ve got the wrong place.”

Young cried during her interview when she remembered how police treated her.

About 13 minutes into the raid, a female officer who later arrived walked Young to her room so she could get dressed, but put the handcuffs back on afterward. Police continued to question Young while she was clothed.

“Ma’am, there’s no firearms in this place?” the sergeant asked.

“There’s no gun in this place…no, no, no,” Young answered. “I am a social worker…I’ve been a social worker for 20 years. I follow the law. I don’t get in trouble for anything. I don’t do illegal stuff. I’m not that person. You’ve got the wrong information.”

The sergeant then told the affiant officer – the cop who got the warrant – to step outside.

“I want to have a conversation with you, let’s go talk outside,” the sergeant said.

But moments later, the officer’s body camera turned off. CPD did not respond to questions about why the camera was turned off – a pattern CBS 2 found both during wrong raids and in CPD’s every day interactions with civilians.

After nearly 20 minutes, police finally removed the handcuffs. Toward the end of the raid, the sergeant apologized to Young, the video shows.

“I do apologize for bothering you tonight,” the sergeant said. “I assure you that the city will be in contact with you tomorrow.”

“Is there anything I can do right now?” the sergeant also asked.

“Just leave and let me move on, this is so crazy,” Young said, still in tears.

“Again, I do apologize for meeting you this way,” the sergeant said. “I will do everything I can do to get the door fixed.”

Officers then attempted to fix her door with a hammer. When that didn’t work, they tried to wedge an ironing board in between the door.

Young said it was “surreal” watching the body camera video of what happened to her nearly two years later.

“It’s almost like a bad movie,” she said. “I feel like I’m watching a movie, but those are no actors, I’m no actor, but this is my life and it happened to me.”

In response to the city’s emergency motion and efforts to stop CBS 2 from airing the body camera video, CBS 2’s attorneys filed a response in federal court Monday night. They said the city’s action is unconstitutional and an attempt to suppress CBS 2’s reporting. While the report was being broadcast, a judge denied the city’s motion.

Even though the incident happened in February of 2019, COPA did not open the investigation or contact Young until nine months later when CBS 2 first broke the story online.

On Nov. 25, 2020 – more than a year since COPA began investigating – COPA said it “is still in the process of serving allegations and conducting all necessary officer interviews.”

While Young continues to live with trauma – that feeling of safety at home, she said, is lost – she leans on her church for healing and support. She believes she has a responsibility to use her voice to help protect others.

And if police don’t make sure they have the correct address before conducting search warrants, she said, their actions will continue to traumatize innocent families.

“The work is warranted – they need to do the work,” Young said. “But they need to do it right. They can’t just callously do it and leave people’s lives in ruins because they got it wrong.”