'You don't leave your friends in a fight': Why this US businessman is staying in Kyiv 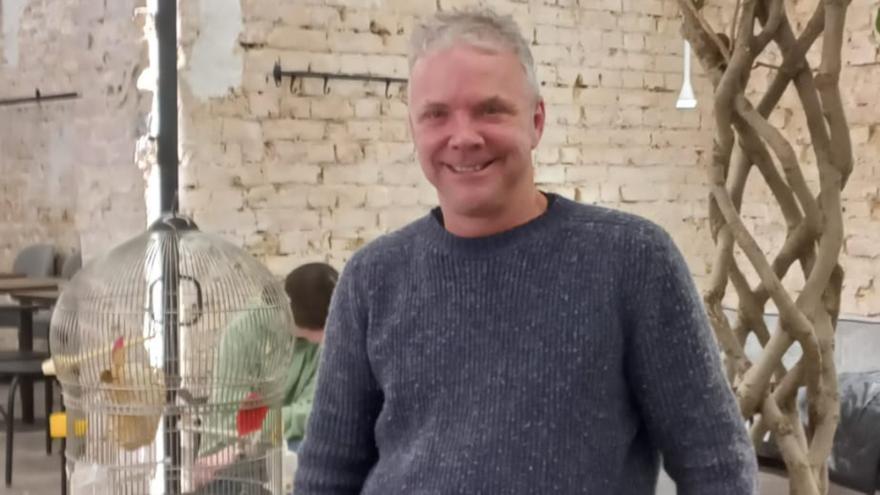 (CNN) -- One recent evening, American businessman Brent Reynolds was chatting by phone from his fourth-floor apartment on Pushkinskaya Street in downtown Kyiv, when a sudden blast interrupted the conversation.

"Just a minute -- let me look," he told me, as he stepped out onto the balcony. "We just had an explosion. It sounded like it was within a kilometer or so, I think; but it's hard to tell, in a city. I heard one the other day that sounded close and it was 10 kilometers away."

"Do you need get to a bomb shelter?"

"No," he said, noting the warning sirens weren't sounding. "No, it's all right."

"I was tired of sitting on Pushkinskaya and having a latte and waiting for the Russians, so I went out to the local and national police headquarters," he said. "I stood in line for seven hours for a Kalashnikov. I couldn't get one. I went out again the next day during curfew and tried to get one and I couldn't. They told me to go home."

On February 27, as a 40-mile-long column of Russian tanks, armored vehicles and artillery began making its way from Belarus toward Kyiv, Ukrainian President Volodymyr Zelensky called for volunteers from around the world to help defend the country from the Russian invasion. By March 3, Zelensky said in a video address on Facebook, "Ukraine is already greeting foreign volunteers. (The) first 16,000 are already on their way to protect freedom and life for us, and for all."

Where volunteers are coming from, and how many have arrived, couldn't immediately be independently confirmed. Ukrainian officials have invited volunteers with previous military and combat experience or who want to gain such experience. The Russian Defense Ministry, meanwhile, said Thursday foreign "mercenaries sent by the West" would not be considered lawful combatants and would not have the right to prisoner-of-war status.

The U.S. State Department has repeatedly told Americans not to go to Ukraine; Secretary of State Antony Blinken said Wednesday Americans who want to help should focus on providing assistance through humanitarian assistance organizations.

Ukraine legalized the service of foreigners in its military in October 2015, after Russia seized the Crimean Peninsula from Ukraine and then backed separatist groups in Donetsk and Luhansk in eastern Ukraine's Donbas region. Those who join are given an expedited path to Ukrainian citizenship.

Between then and the beginning of this year, only a small number of Americans have been among the thousands of foreigners who have served with the Ukrainian military and fought in the breakaway regions, according to military analysts.

In recent weeks, as Russia amassed forces and then launched its latest attack on Ukraine, news organizations across North America and Europe have reported on people eager to volunteer to help defend the country. The Ukrainian government has set up a process for them to join the International Legion of Territorial Defense of Ukraine by applying through Ukrainian embassies or consulates.

But it's another matter for those foreigners already living in Ukraine -- those who haven't already joined the one-million-plus Ukrainians who have fled the fighting and left the country. The U.S. embassy in Kyiv has relocated to Lviv, near the Polish border, as have the embassies of the UK, France and Japan, among others. The UN has also moved most of its personnel out of the city.

When I called Reynolds, it was the first time we'd spoken in decades. We knew each other when we were children; our respective maternal grandparents were next-door neighbors; and when his family visited, we played together.

After we caught up on the phone and talked for a while, I asked Reynolds if he knew other expatriates who might want to talk. He said he did, only to discover when he reached out, that they'd all left. He saw four cars in his building's courtyard one recent evening. "There used to be 20 or 30," he said. "A lot of people have left. Everybody with a car took it. I'd guess half of Kyiv has gone."

After some months in Beijing, Reynolds moved to Kyiv 15 months ago, looking to invest in local businesses such as a biogas plant that produces renewable fuels. He was also planning to switch some production of his main business -- selling hats under his "Mad Bomber" brand -- from China to Ukraine. (The name, which he came up with 40 years ago, refers to his approach to ski jumping in the 1980s.)

Reynolds launched his business straight out of college after a trip to China, where he bought souvenirs and other goods and then sold when he returned home. In the early 1980s, he began retailing fur hats from China in the U.S., Europe and the Soviet Union, traveling frequently. "They sold like crazy," he said.

When he first came to Ukraine at the end of 2020, his youngest son, then 15, came with him. They took a 10-day rental car trip from Kyiv to Lviv and the Carpathian mountains. His teenage daughter also spent a high-school semester at an international school in Kyiv, he said.

But over the past several months, as the likelihood of a renewed Russian attack on Ukraine grew and then became reality, many of Reynolds' friends and family have urged him -- directly or through social media posts -- to return to the U.S. He has four children, 16 to 24 in age, and is in the midst of divorcing his wife.

When I reached out to him a few days ago via Facebook, the first response I got was from his mother in Virginia, saying: "Bob don't encourage him pls."

"I think he's nuts," his sister, Kathy Reynolds, told me by phone. "My parents are completely stressed out and very upset, and he's adamant, and I don't know why."

She was particularly agog her brother had flown from Kyiv to Helsinki not long before the Russian attack, then turned around after a couple of days and returned to Kyiv.

"I've got a lot of Ukrainian friends with kids," Brent Reynolds said. "I decided I wasn't going to leave if the Russians were coming. It was more an emotional than a logical decision. I just felt like, you don't leave your friends in a fight."

Like his Ukrainian friends, Reynolds has sought shelter at the nearest subway station -- the Teatralna stop, just off of the central Khreshchatyk Street -- when defense sirens warned of Russian shelling. His children, through smart phone apps, have shown him where Russian strikes have hit in and around Kyiv.

After two days trying to volunteer and get a rifle in Kyiv, Reynolds heard there were weapons being distributed around Hostomel, 25 kilometers out of town, near where Russian forces, including helicopter gunships, recently fought over control of an airfield. Reynolds, who has regularly competed in triathlons in recent years, rode his bicycle toward Hostomel, but was stopped at a military checkpoint.

"I ended up waiting and talking to one of the commanders," he said. "I grew up in a military family; I get along with the Ukrainian military. We had a laugh; we talked for a while. They said, 'No, go home.'"

Reynolds is careful not to take any photos of soldiers or anything military. "I've had my camera checked a couple of times at checkpoints," he said. "Everybody's jittery."

In recent days, Ukrainian officials have warned of pro-Russian agents in Kyiv believed to be spying or engaging in sabotage.

"There were a lot more bomb blasts today," Reynolds said Friday. He left his apartment to help a female friend and her children get to the train station so they could evacuate to Lviv. In recent days, as CNN and other news organizations have reported, thousands of Kyiv residents have crowded the train station daily, trying to move westward. But large numbers of other residents remain in Kyiv, trapped for a variety of reasons.

Doesn't he think he should follow his own advice?

"It's anxious; it's tough, waiting for the Russians to come," Reynolds said. "The city is an armed, blockaded fortress. I don't believe it will fall unless Zelensky or the leadership decide to give up to avoid bombing."

Reynolds said morale among the Ukrainians with whom he speaks remains good. If he does decide to leave, Reynolds said he'll ride his bicycle 300 kilometers to Moldova, a trip he thinks will take two days.

But he doesn't plan to leave anytime soon.