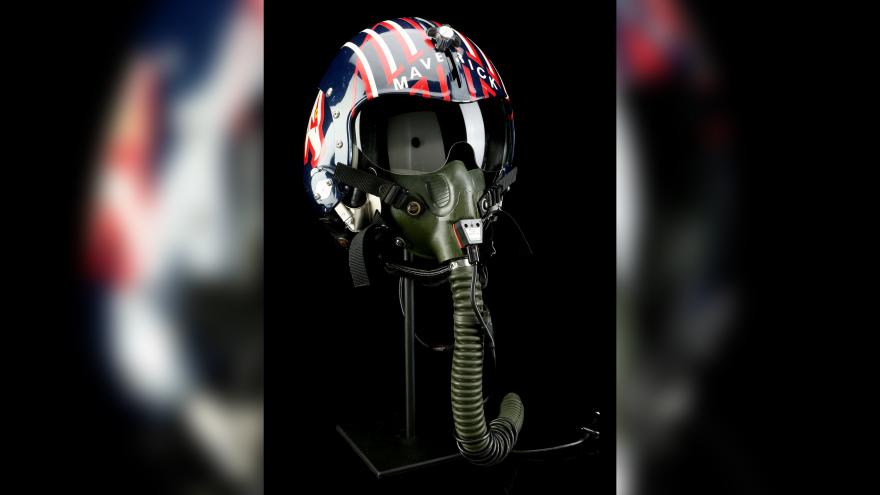 (CNN) -- A flight helmet made for Tom Cruise when he was making the movie "Top Gun" is up for auction in Los Angeles and is expected to sell for more than $65,000.

It's one of three helmets that were made to fit Cruise, who played the brash, heroic Navy pilot Pete "Maverick" Mitchell in the 1986 blockbuster, according to Prop Store, which is conducting the auction.

The helmet has eagle stickers on each side and Cruise's Maverick call sign written across the front and the back.

A total of 10 "Maverick" helmets were made for Cruise and the various stunt pilots in the film, according to a letter of authenticity from costume supervisor James W. Tyson. After the production, two went to the Smithsonian Institution, three were sold to the Hard Rock Cafe and the rest were given to the film's director, producers and stars.

"We can't state specifically that it's screen worn, but it is definitely an original from the production," Prop Store chief operations officer Brandon Alinger told CNN.

If that's too rich for your blood, name tags that were salvaged when Maverick and other characters' flight suits were reused in another movie are up for sale along with production Polaroid pictures of Cruise and co-stars Kelly McGillis and Anthony Edwards.

The helmet is one of the more than 850 pieces of memorabilia from "Star Wars," "Star Trek," "Doctor Who," the "Terminator" franchise, "Gladiator" and other classic movies and TV shows that are going on the auction block on Wednesday and Thursday.

A 1:4 scale model miniature puppet of the Xenomorph Queen from the sequel "Aliens" sold for $85,000 on Wednesday.

The auction is usually held in person, but Alinger said this year, they're holding a virtual auction because of Covid-19 restrictions.

Buyers can place their bids online or over the phone and the whole thing is being streamed online so movie buffs can follow the action.