'You are the very spine of America': Biden honors those who served on Veterans Day in Arlington 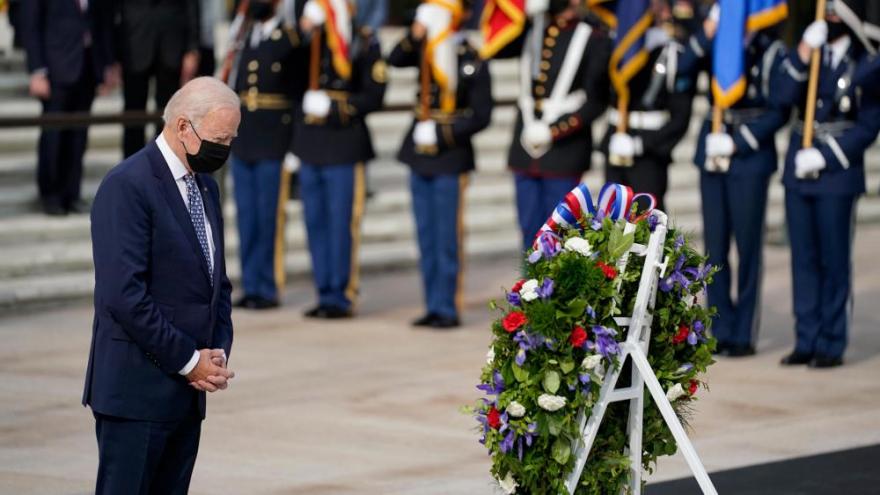 President Joe Biden pauses during a wreath-laying ceremony to commemorate Veterans Day and mark the centennial anniversary of the Tomb of the Unknown Soldier at Arlington National Cemetery, Thursday, Nov. 11, in Arlington, Virginia.

(CNN) -- President Joe Biden honored Veterans Day at Arlington National Cemetery on Thursday, paying homage to Americans who have served and laying a wreath at the Tomb of the Unknown Soldier.

During a speech in Arlington, Biden said having served is "a badge of courage that unites across all ages, regardless of background -- because to be a veteran is to have endured and survived challenges most Americans will never know."

"You've come through the trials and testing, braved dangers and deprivations, faced down tragic realities of war and death. You've done it for us. You've done it for America. To defend and serve American values. To protect our country and our Constitution against all enemies. And to lay a stronger, more secure foundation on which future generations can continue to build a more perfect union," the President continued.

"You are the very spine of America -- not just the backbone, the spine of this country," Biden said. "And all of us owe you. And so on Veterans Day and every day, we honor that great debt and recommit ourselves to keeping our sacred obligation as a nation to honor what you've done."

The President also recalled the experience of his late son, Beau, deploying to Iraq, telling the audience, "for me and for Jill and for the entire Biden family, it's personal."

"Jill and I learned what it meant to pray every day for the safe return of someone you love. So many of you have done that. Our grandkids learned what it meant to have their dad overseas in a war zone instead of back at home for a year, tucking them into bed reading that story every night. Thousands of Americans, tens of thousands, have had that experience," Biden said.

The commander-in-chief, during his speech, honored three veterans who died in recent weeks: Gen. Colin Powell, Sen. Max Cleland and Gen. Ray Odierno, saying they "inspired generation after generation of Americans to step forward to defend our nation".

The President specifically noted the sacrifice of those who served in Iraq and Afghanistan, including those who died and those who returned with "psychological wounds of war" and other medical issues.

"We're going to work with Congress -- Republicans and Democrats -- to make sure our veterans receive the world-class benefits that they've earned. ... That means expanding presumptive conditions like toxic exposure to particulate matter, including Agent Orange and burn pits. We're going to keep pushing on this front to be more nimble and responsive, reviewing all the data and evidence to determine additional presumptive conditions that make sure our veterans don't have to wait to get the care they need," he said.

Biden also made a personal plea to those who may be experiencing mental health struggles in the wake of their service, and he also pledged that his administration was focused on "making sure the growing population of women and LGBTQ+ veterans receive appropriate services and support."

Earlier Thursday morning, the President hosted veterans and members of the military community at the White House and participated in a wreath-laying ceremony on the centennial anniversary of the Tomb of the Unknown Soldier.

And earlier Thursday, the Biden administration announced a series of new support options for veterans who had been exposed to "contaminants and environmental hazards," such as burn pits, while serving.

Burn pits were used to incinerate all sorts of waste, hazardous material and chemical compounds at military sites throughout Iraq and Afghanistan. Eighty-six percent of post-9/11 veterans who served in Iraq or Afghanistan say they were exposed to burn pits, according to a 2020 survey by the nonprofit Iraq and Afghanistan Veterans of America.

The steps, which the White House detailed in a fact sheet, seek to "improve our understanding of the health effects of military-related exposures, educate providers and veterans about these exposures, and provide timelier access to health services and benefits for individuals who were exposed."

Veterans advocate Jeremy Butler called the White House announcement a "nice first step" but expressed criticism that there was more to be done at a congressional level to protect veterans, particularly those impacted with respiratory responses to "burn pits" while serving.

"The reality is this is a very nice first step, but there's a lot more that needs to be done. This is a good step by the administration," Butler said in an interview on CNN's "New Day" Thursday.