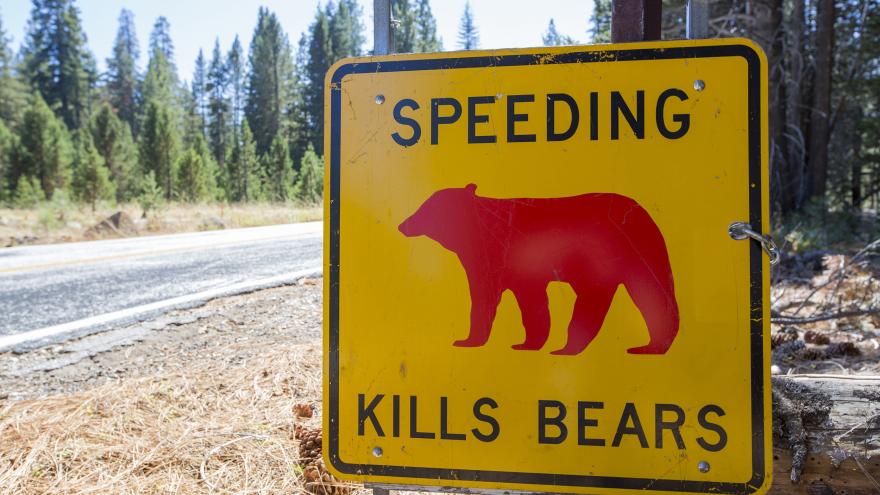 (CNN) -- A ranger at Yosemite National Park is pleading to visitors to drive slow and stay alert after another bear was killed by a car.

The warning to visitors was shared on the park's website and Facebook account last week along with a heartbreaking photo showing a mama bear standing over the dead cub.

"We get this call a lot. Too much, to be honest," reads the blog post. "'Bear hit by vehicle, dead on the side of the road.' Sadly, it's become routine."

The ranger goes into detail on how they set off to locate the bear's body and move it off the roadway to "prevent any other animals from getting hit while scavenging on it." The ranger also says they will takes measurements, collect samples and other data while at the scene. The bear's death will be yet another number to add to the total of bears hit by vehicles this year.

"I try to remember how many times I've done this now and, truthfully, I don't know," reads the post. "This is not what any of us signs up for, but it's a part of the job nonetheless."

Around 300 to 500 black bears roam the national park, according to the park's website. The bears are particularity active right now due to raspberry season in the region.

"We are seeing a huge increase in bears entering development and getting close to people in their search for food, particularly since many of the best berry patches are in and around the areas where people walk or gather," reads the park's latest bear activity report.

Eight bears have been hit by vehicles along the park's road

The ranger said the female cub that was hit by the car couldn't have been more than six months old.

"For a moment I lose track of time as I stand there staring at its tiny body, but then the sound of more cars whizzing by reminds me of my place and my role," reads the post. "I let out a deep sigh and continue on with my task. I pick up the cub—it couldn't be much more than 25 pounds—and begin carrying it off into the woods."

A total of eight bears have been hit by vehicles along the park's road this year, according to data from the park.

The ranger said they carried the cub off into the woods when an unexpected visitor made their presence be known. Another bear was seen staring back at the ranger.

"Surprised, I stand up quickly and the bear runs off into the brush but stops not far off and looks back at me," reads the post. "Acting on instinct, I pick up a stick and smash it over a tree to scare the bear further away."

The ranger suspects it was common area for a bear crossing since there was another bear hit by a car in the same area. But then something happens that makes the ranger realize that this bear hanging around the area was grieving.

"From behind me there's a deep toned but soft sounding grunt. I immediately know what it is," reads the post. "It's a vocalization, the kind sows (female bears) make to call to their cubs. I turn and look in its direction and there she is, the same bear from before intently staring back at me."

"This bear is the mom, and she never left her cub."

The ranger stated that the mama bear kept calling out to the cub and the calls "sounding more pained each time." The ranger packed up their supplies and on the way out of the area set up a remote camera to capture the interaction.

"Why? Every year we report the number of bears that get hit by vehicles, but numbers don't always paint a picture," reads the post. "I want people to see what I saw: the sad reality behind each of these numbers."

'Protecting Yosemite's black bears is something we can all do'

The plea by the ranger comes as the park is in peak season for visitors -- June through September are the park's busiest months.

"Remember that when traveling through Yosemite, we are all just visitors in the home of countless animals and it is up to us to follow the rules that protect them," reads the post. "Go the speed limit, drive alertly, and look out for wildlife. Protecting Yosemite's black bears is something we can all do."

The pandemic sparked park closures last year as residents stayed home to curb the spread of the coronavirus. During that time, bears and other wildlife in the park thrived in all the extra space they had to roam the area.

"The bears are just literally walking down the road to get to where they need to go," Ranger Katie Patrick said during a Facebook Live last year. "For the most part, I think they're having a party," she said in response to questions about what the animals have been doing since Yosemite was closed at the time.

Now, as pandemic restrictions have been lifted and vaccines are readily available, more visitors have been traveling to the park in California.

So far this fiscal year, the park has seen over 1.1 million recreational visitors, according to the park's report from May.