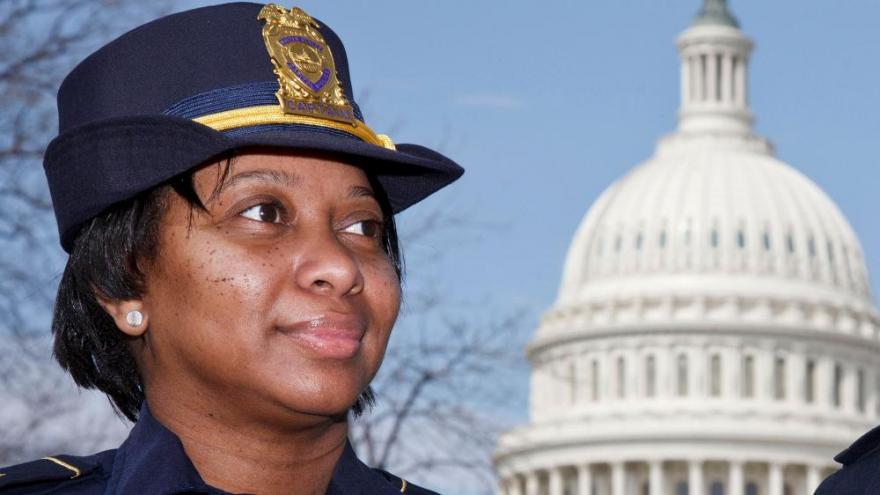 (CNN) -- The US Capitol Police has appointed a Black woman as its acting police chief after the former head resigned in the fallout from the agency's inadequate response to pro-Trump rioters who staged an insurrection at the Capitol last week.

Yogananda Pittman, who previously served as an assistant chief, will be the first woman and first Black person to head the Capitol Police, according to Morgan State University, the historically black school that Pittman graduated from in 1999. CNN reached out to Capitol police and has not been able to independently confirm this.

Pittman will be replacing former chief Steven Sund, who resigned last week after he was criticized for being ill-prepared to respond to the deadly mob on Capitol Hill.

"Chief Pittman is a very progressive Chief," Sund told CNN on Monday. "She's very concerned as well about the welfare of the officers."

The police response spotlighted what many Black activists and civil rights leaders say is a double standard where police used more aggressive tactics -- such as tear gas and rubber bullets -- on Black Lives Matter protesters last summer but were more lenient with the pro-Trump White rioters.

Images of police letting rioters through the Capitol gates, escorting them down the Capitol building steps and taking selfies with them, have sparked outrage among Black people. At least five people, including a Capitol police officer, were killed in the mob.

Former Chief of the US Capitol Police Terrance Gainer called the Capitol riot a failure of Capitol police.

"No one was supposed to get that close to the doors and windows of the building," Gainer said, adding that it must be thoroughly investigated.

Pittman comes with a track record of making history as a Black woman in law enforcement. She joined the department in April 2001 and became one of the first Black female supervisors to achieve the rank of Captain, according to the Capitol police website. As captain, she managed more than 400 officers and civilians and led the security footprint for the 2013 presidential inauguration.

Pittman's other assignments have included providing security and protective details for US Senators and visiting dignitaries and serving as an Inspector in the Office of Accountability and Improvement.

Pittman has a Bachelor of Science in psychology from Morgan State and a Master's degree in Public Administration from Marist College in Poughkeepsie, New York, according to a statement from Morgan State.

Pittman's appointment will put her among the few Black women police chiefs in the nation.

Juanita Holmes was named chief of patrol for the New York City Police Department last year making her the first Black woman to hold the post.

Some of the women were among the police chiefs who came under fire last year when they were criticized for the police killings of Black men and how they handled the protests in their cities.

Outlaw, who previously served as Portland's first Black female chief, has publicly apologized for police tear gassing protesters in Philadelphia last June, saying it was not justified. She also met with the family of Walter Wallace Jr., who was killed by a police officer in October, and allowed them to review body cam footage of the incident before releasing it to the public.