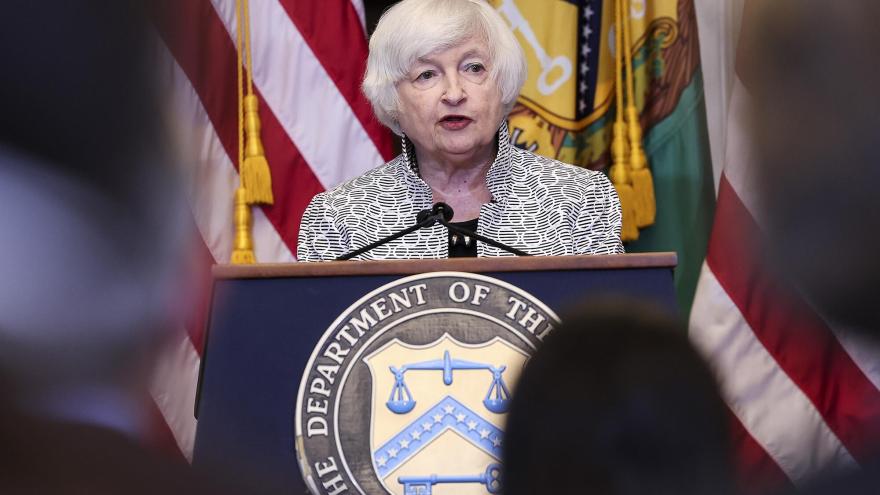 Treasury Secretary Janet Yellen said September 11 that there is a "risk" that US gas prices could rise again later this year, as fears grow over the possibility that Americans' wallets could be strained by a spike in prices similar to the one seen this summer.

(CNN) -- Treasury Secretary Janet Yellen said Sunday that there is a "risk" that US gas prices could rise again later this year, as fears grow over the possibility that Americans' wallets could be strained by a spike in prices similar to the one seen this summer.

"Well, it's a risk. And it's a risk that we're working on the price cap to try to address," Yellen told CNN's Dana Bash on "State of the Union" when asked if Americans should be worried about gas prices rising again later this year.

"This winter, the European Union will cease, for the most part, buying Russian oil. And, in addition, they will ban the provision of services that enable Russia to ship oil by tanker. And it is possible that that could cause a spike in oil prices," she added.

Yellen continued: "Our price cap proposal is designed to both lower Russian revenues that they use to support their economy and fight this illegal war, while also maintaining Russian oil supplies that will help to hold down global oil prices. So I believe this is something that can be essential, and it's something that we're trying to put in place to avoid a future spike in oil prices.

The secretary's comments could help fuel fears that gas prices will spike again after they began sinking last month, providing relief to inflation-weary consumers and an economy mired in a slowdown. The steady decline in prices has been driven by multiple factors, including recession fears that have knocked down oil prices and the fact that some Americans cut back on driving when gas prices spiked above $5 a gallon.

Earlier this month, finance ministers from the G7 group of countries -- the US, Japan, Canada, Germany, France, Italy and the United Kingdom -- said they would ban the provision of "services which enable maritime transportation of Russian-origin crude oil and petroleum products globally" above the price cap. That could block insurance cover or finance for oil shipments.

The maximum price would be set by "a broad coalition" of countries, they said in a joint statement. It would take effect alongside the European Union's next batch of sanctions, which include a ban on seaborne imports of Russian oil starting in early December.

Yellen on Sunday also underscored her faith in the Federal Reserve to determine how best to avoid an economic recession, but acknowledged a potential recession is "a risk when the Fed is tightening monetary policy to redress inflation, so it's certainly a risk that we're monitoring."

"We're seeing some slowdown in growth, but that's natural," she told Bash, noting the bad shape of the economy President Joe Biden inherited in 2021.

She added that despite higher food and energy prices, "We've got a good, strong labor market, and I believe it's possible to maintain that."

Yellen stressed that she's optimistic about the economy and emphasized that the US is not in a recession. In response to high inflation, the Federal Reserve has increased interest rates four times so far in 2022 and is likely to raise rates again this year.