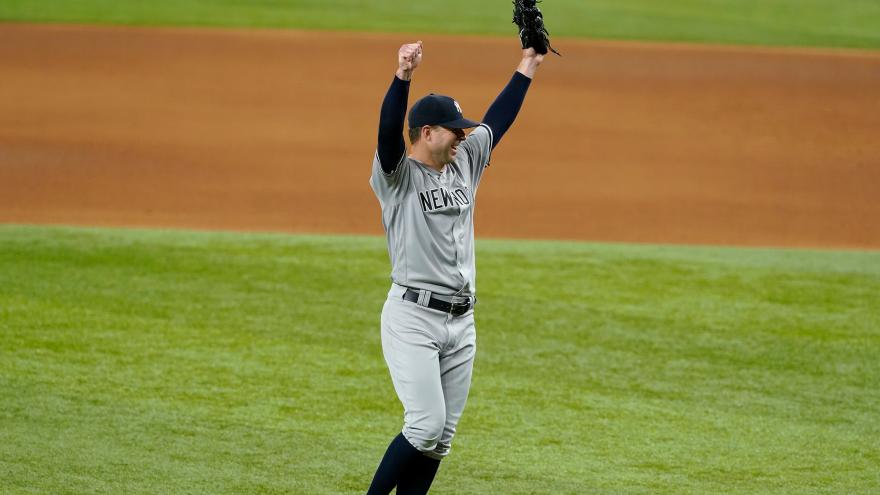 (CNN) -- For the second night in a row, there has been a no-hitter in a Major League Baseball game.

Corey Kluber of the New York Yankees was the latest to accomplish the feat, against the Texas Rangers in Arlington on Wednesday. The Yankees won 2-0, with a lone walk costing Kluber a perfect game.

"It was a lot of fun," Kluber said afterward. "It was a special night, I've never been part of one, witnessed one, let alone thrown one," adding that he did not begin thinking about the possible no-hitter until the sixth inning and wasn't "all-in" on the thought until the ninth.

Kluber is the first Yankee to toss a no-hitter since David Cone pitched a perfect game against the Montreal Expos in 1999, according to the team.

Kluber is a two-time American League Cy Young winner and the no-hitter capped a career comeback. A longtime Cleveland Indian until moving to Texas, he pitched in only one game last season for the Rangers due to injury before joining the Yankees.

Madison Bumgarner of the Arizona Diamondbacks also no-hit the Atlanta Braves in April, yet the performance did not count as an official no-hitter because the game was shortened to seven innings for a doubleheader that day.

Less than 24 hours earlier, on Tuesday night, Detroit Tigers pitcher Spencer Turnbull threw a no-hitter in Seattle against the Mariners.

Other teams around the league may be looking ahead at their schedules, as the six official no-hitters tossed this season have been against three teams: The Rangers (twice), the Mariners (twice) and the Indians (twice). No team has ever been no-hit three times in the same season.