Xiaojie Tan owned 2 spas and planned to retire soon, then she became one of the Atlanta gunman's first victims 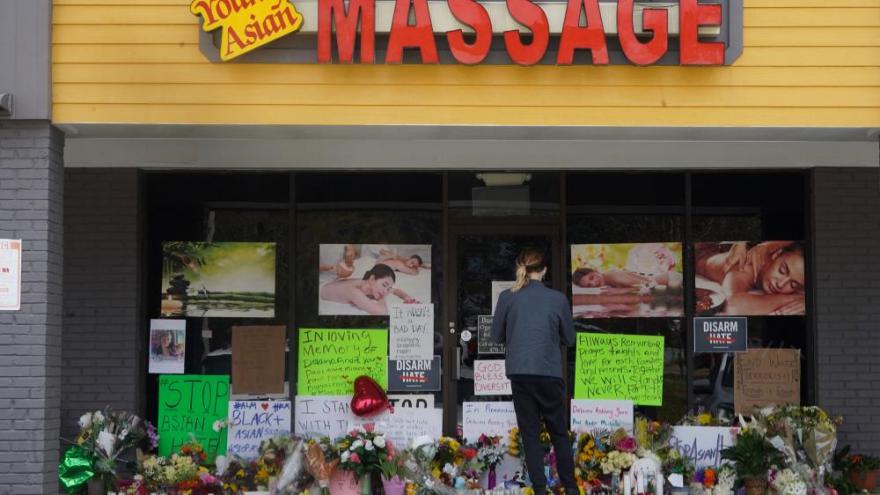 A woman stands in front of a makeshift memorial outside Youngs Asian Massage, one of the sites of three deadly shootings at three different spas in Acworth, Georgia, March 19, 2021.

(CNN) -- Jami Webb was planning to celebrate her mother's 50th birthday last week. But Xiaojie Tan, the owner of Youngs Asian Massage in Acworth, Georgia, was killed Tuesday along with seven others at three Atlanta-area spas in a shooting rampage that has rattled the nation.

"I just want to hold her tight," Webb told CNN about her mother. "Give her a hug ... hold her hand, hug her for a long time."

Four people were killed at Tan's Cherokee County spa. Four more were killed about an hour later at two spas some 30 miles away in Atlanta. Six of the victims were Asian women.

Tan met her ex-husband, Michael Webb, when he was on business in China.

The two married and moved in 2004 to Port St. Lucie, Florida, where Tan enrolled in nail school to get her license to be a nail technician.

The couple later moved to Marietta, Georgia, and Tan bought a nail salon. Known as Emily by many of her friends and clients, she later sold that and bought the Acworth spa and later a second spa, Webb said.

Webb described her as a hardworking woman who'd work seven days a week.

Recently, Tan had told him she'd be able to retire soon. In the future, she hoped to travel, and wanted to visit Alaska and Europe.

"This was a massacre," Michael Webb said. "We have a justice system and he'll have to be held accountable. And our family will be involved in that process as much as we can be."

"We just want justice to be done and we're hopeful that it will be," he said.

Residents and public health officials have called on investigators to consider hate crime charges against the suspect, whether on the basis of race or sex -- both of which are covered in Georgia's hate crime law.

"The acknowledgment that this was a crime built upon hatred for a particular community matters and I think that it's important that prosecutors and police consider that in making those charges," Atlanta Mayor Keisha Lance Bottoms told CNN on Saturday.

Jack Liang, the organizer of an anti-hate rally Sunday in New York City, said justice would not be served in his eyes if the suspect didn't face hate crime charges.

"He went to three different, separate locations, and he targeted these people," Liang said. "And if it was another race, another type of hate crime, another person, would that be counted as a hate crime?"

These are the victims of violence

Within an hour after the first shooting, four Asian women were killed on Piedmont Road in Atlanta -- three at the Gold Massage Spa and one at the Aroma Therapy Spa across the street, authorities said. They were identified as Soon Chung Park, 74; Hyun Jung Grant, 51; Suncha Kim, 69; and Yong Ae Yue, 63, according to the Fulton County Medical Examiner's Office.

Yue's youngest son wrote on GoFundMe that his mom "loved to introduce our family and friends to her home-cooked Korean food and Korean karaoke."

"We are still in shock over the violent murder of our mother, but through our grieving we are making plans to memorialize her, bring our family together, and resolve her financial matters," he wrote.

On another GoFundMe page, one of Kim's grandchildren wrote in a post that she had come to the United States from South Korea and worked two to three jobs while speaking very little English.

"My grandmother was an angel, to have her taken away in such a horrific manner is unbearable to think about. As an immigrant, all my grandmother ever wanted in life was to grow old with my grandfather, and watch her children and grandchildren live the life she never got to live," the page says.

Meanwhile, a GoFundMe page dedicated to help the two sons of Grant, killed at the Gold Massage Spa in Atlanta, has raised more than $2.5 million.

"She was one of my best friends," her son, Randy Park, wrote on the page, "and the strongest influence on who we are today."

Long told police he believed he had a sex addiction and that he saw the spas as "a temptation ... that he wanted to eliminate," Cherokee County Sheriff's Office Capt. Jay Baker said on Wednesday. Long claimed the attacks weren't racially motivated, Baker added. But Atlanta police say it's still too early to know the suspect's motive.

Long is being held without opportunity for bail in Cherokee County, where he faces four counts of murder with malice, one count of attempted murder, one count of aggravated assault and five counts of using a firearm while committing a felony.

He has been charged with four counts of murder in connection with the two spa shootings in Atlanta, according to Atlanta police.

Long's church, Crabapple First Baptist Church, announced Sunday morning it had removed him from its memberships ranks, saying in a statement it could "no longer affirm that he is truly a regenerate believer in Jesus Christ."

Sunday's service opened with a church member reciting the names of the victims whose lives were taken in an "inexcusable act of murder," Associate Pastor Luke Folsom said, according to a recording provided by the church.

"We have been grieving over this tragic loss of life all week, and we will continue to mourn for the victims and their families," Folsom said. "So that's what we're going to do today."

Rallies across the country

Amanda Pham, an Asian American woman living in Atlanta, told CNN this weekend that hateful comments directed towards her had increased recently, especially during the coronavirus pandemic. She described wearing a mask and someone asking her, "Hey, are you going to give me the virus?"

"This isn't new," she said. "It's been happening, it's increasingly happened over the past year, just (since) the start of the pandemic."

Americans have gathered in rallies across the country this weekend to honor the victims and condemn violence against Asian Americans.

Hundreds of demonstrators gathered in Atlanta Saturday, including Timothy Phan, a Florida resident who drove eight hours to attend. He told CNN the violence "hits home."

"I see my mother, I see my acquaintances, my colleagues," he said. "This is an Asian issue but on top of that, this is more than that, this is a human issue."

"We're in this struggle together," Henry Wong told CNN affiliate KGO at another rally this weekend in San Francisco. "If we don't voice it now when will we?"

"One of the biggest problems in fighting hate crimes is that too many of the incidents are not recorded," California Assembly member Al Muratsuchi, who introduced a bill to establish a statewide hate crime hotline, told CNN. "We want to make it as easy and safe as possible for people to report these incidents of hate crime."

Correction: An earlier version of this story incorrectly identified a woman in Atlanta who spoke to CNN. Her name is Amanda Pham.