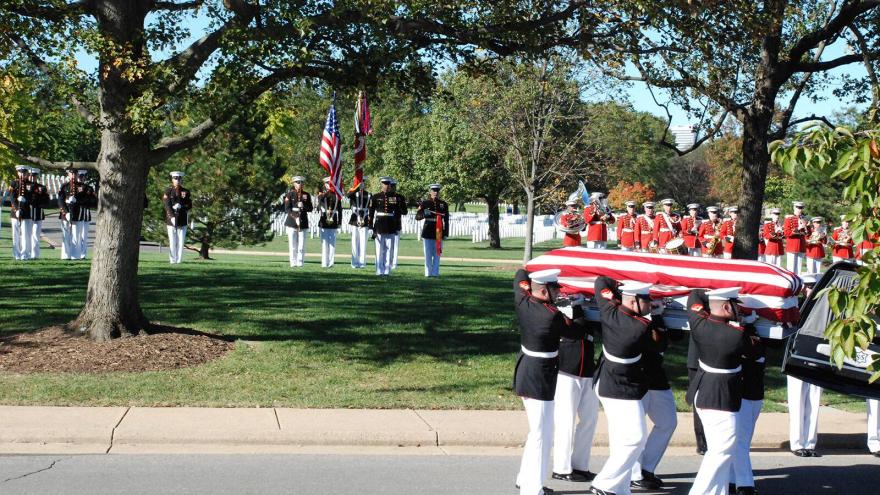 (CNN) -- A Marine who died in World War II was finally laid to rest in Arlington National Cemetery Wednesday after his remains had been unaccounted for since his death at 19.

Marine Corps Reserve Pfc. Harold W. Hayden of Norwood, Ohio, died on the third day of the Battle of Tarawa on November 22, 1943, according to a news release from the Defense POW/MIA Accounting Agency (DPAA).

"It's been a long journey for the family, in terms of he's been missing for almost 78 years," Warren Hayden, Harold's half-brother told CNN. "It's an exhilarating feeling to know that he has been brought home."

Hayden was reported to have been buried in the East Division Cemetery, later renamed Cemetery 33, the release said.

"In 1946, the 604th Quartermaster Graves Registration Company centralized all of the American remains found on Tarawa at Lone Palm Cemetery for later repatriation. However, almost half of the known casualties were never found. No recovered remains could be associated with Hayden, and, in October 1949, a Board of Review declared him 'non-recoverable,"' the DPAA said.

But in 2009, a non-profit organization called History Flight, Inc. discovered a burial site on Betio Island believed to be Cemetery 33 and it has been the site of numerous excavations ever since.

In March 2019, remains from an excavation were sent to the DPAA Laboratory in Pearl Harbor to be tested, and the identity of Hayden's remains were confirmed using dental and anthropological analysis, as well as circumstantial and material evidence, according to the DPAA.

Hayden was officially deemed "recovered" by the DPAA in March 2020 and qualified to be buried in Arlington National Cemetery.

"When the DPAA said that was an option, to tell you the truth I swallowed hard," Warren Hayden said. "I didn't even consult the family I just said, 'That's what's going to happen!"'

Hayden's nephew, Marine Staff Sergeant Jesse Hayden, served as his Marine escort when his remains were flown from Hawaii to Maryland.

"It's an incredible honor, and being related to Harold made it even more important to me," Sergeant Hayden told CNN. "It's just a testament to, not only how the military takes care of their own, but the Marine Corps ... it's hard to put into words."

Hayden's casket, covered in an American flag, was met at the airport by other family members and a full serviceman's welcome from the Marines.

Warren Hayden said it was the first time some of the family members have met each other and that made the experience extra special.

The family has a message to other families waiting for their loved ones.

"Resilience is a good word. It requires waiting. Getting answers, and waiting, but ultimately it requires the extreme excellence of America to get these guys home. You can't get it with half effort," Warren said.