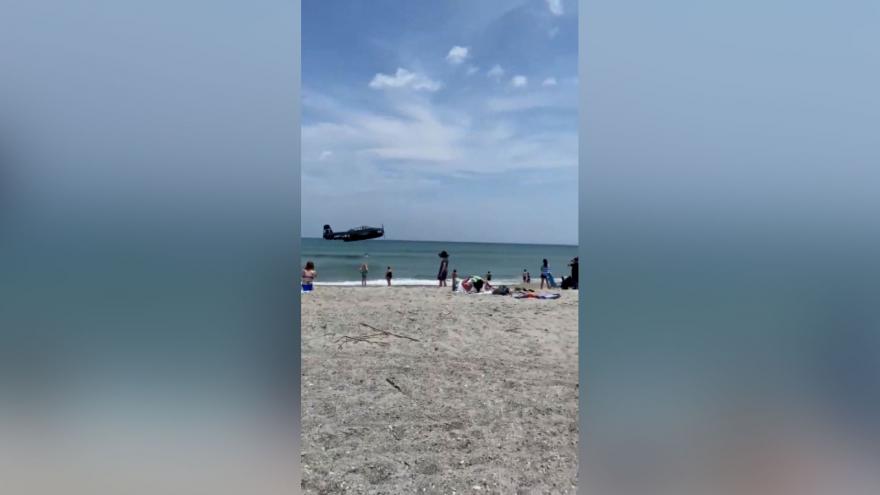 (CNN) -- A World War II-era plane was forced to land off the coast of Cocoa Beach, Florida, Saturday afternoon after it experienced engine failure.

Authorities are now working on getting the plane, which was part of an air show, out of the water, according to Cocoa Beach Air Show spokesperson Chris Dirato.

The only person on board the plane, the TBM Avenger, was the pilot. When he realized the plane was having engine problems, he initially tried to make it to the nearby Patrick Space Force Base where the air show was being held, according to Dirato.

Ultimately, the pilot changed his mind and decided to make a water landing to avoid going over buildings and Florida State Road A1A, Dirato added.

The pilot was uninjured, Dirato said, and even waved at the onlookers after getting out of the plane, which is owned by the Valiant Air Command, Inc. in nearby Titusville.

"Most of you know that our TBM Avenger was forced to land due to engine failure," the Valiant Air Command said on Facebook. "The good news is that the pilot is fine. The not so good news is that it may take several years to rebuild the Avenger."

The Federal Aviation Administration (FAA) is currently investigating the incident and will "release the tail number of the aircraft after investigators verify it at the accident site," according to the agency's statement to CNN.

Rescuers are trying to figure out how to get the plane out of the water.

"They might have to remove the wings to get it out of the water and to the hanger," Dirato told CNN.

Alternately, rescuers may float the plane up on a barge.