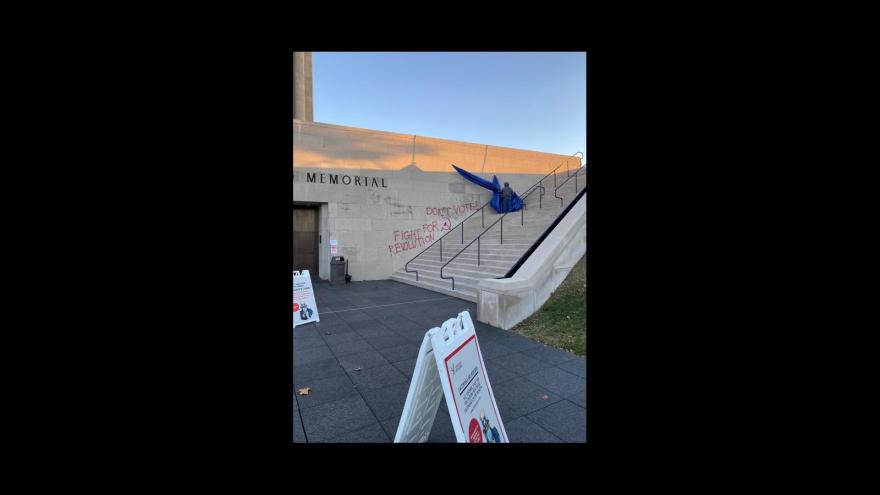 The vandalism occurred overnight before the memorial opened its doors to voters at 6 a.m.

(CNN) -- A World War I museum that's doubling as a polling location fired back at overnight vandals who allegedly left a vague message discouraging voting.

The WWI Museum and Memorial in Kansas City, Missouri, announced Tuesday morning that someone had spray-painted the messages "Don't vote" and "Fight for revolution" in red on its stonework.

The message, which was similar to other acts of vandalism in Texas and Pennsylvania, also featured a communist symbol.

"Our democracy is something that generations of veterans, including those in WWI, have fought to defend," the memorial said in a statement that was released on social media, and also shared with CNN. "Today we'll clean this up and we hope that you'll all do your part to vote and make your voices heard."

The vandalism at the memorial happened overnight, the museum said, and workers were seen covering it up with blue tarp Tuesday morning. The memorial opened its doors at 6 a.m. to voters and it was cleaned up soon thereafter.

How many other sites have been vandalized ahead of the election?

Similar acts of vandalism have occurred in Pennsylvania and Texas this week -- all bearing identical graffiti. It's unclear who is behind the messages.

Conor Lamb, the Democratic US representative for Pennsylvania, shared a photo of the words "Don't vote" and "Fight for revolution," along with a communist symbol, that he said was spray painted outside of his office on Monday.

While Republican congressional candidate, Sean Parnell, and Democratic representative Mike Doyle shared similar photos of the graffiti last Sunday that he said was painted on his home.

"The overwhelming majority of Americans wholeheartedly support free and fair elections, which are the foundation of our democratic government," Doyle said in a statement to CNN affiliate KDKA. "Vandalism...will never change that."