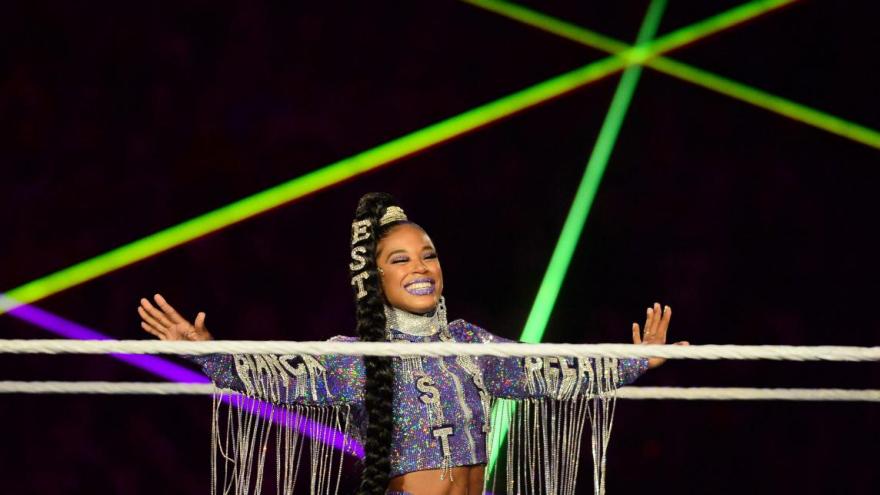 WWE stars Bianca Belair and Sasha Banks made wrestling history as the first Black women to face each other in a WrestleMania title match, according to the sports entertainment company.

(CNN) -- WWE stars Bianca Belair and Sasha Banks made wrestling history as the first Black women to face each other in a WrestleMania title match, according to the sports entertainment company.

Belair defeated Banks, becoming a champion for the first time in her WWE career, according to WWE.

The duo stepped into the ring on Saturday night to close out the first night of WrestleMania 37, WWE's biggest event of the year. Both were met with cheers from fans, who were in attendance for the first time in over year.

Over 25,000 fans attended the live event at Raymond James Stadium in Tampa Bay, Florida, while millions more watched from home through streaming platforms, according to WWE.

"I love the fact that this is not just something that's just about me and it's not just about making history," Belair, 32, told the Tampa Bay Times last week. "It's about going out and representing for women and for Black women. It's going to be amazing."

Belair won the right to choose her opponent after she won this year's women's Royal Rumble match. In February, she announced that she would take on Banks, 29, for the SmackDown Women's Championship title.

"But this is the first time ever that two African American women will be headlining at WrestleMania," Banks, whose real name is Mercedes Varnado, said on the podcast Token CEO. "So this is crazy because it's bigger then me and I think that's what the beautiful thing is."

Other stars to face off on Saturday included Braun Strowman versus Shane McMahon, and Bobby Lashley against Drew McIntyre.

Puerto-Rican music artist Bad Bunny made his WWE debut as he teamed up with Damian Priest to defeat The Miz and John Morrison.

The two-night event continues Sunday. It is streamed on Peacock in the United States and on the WWE Network around the world.