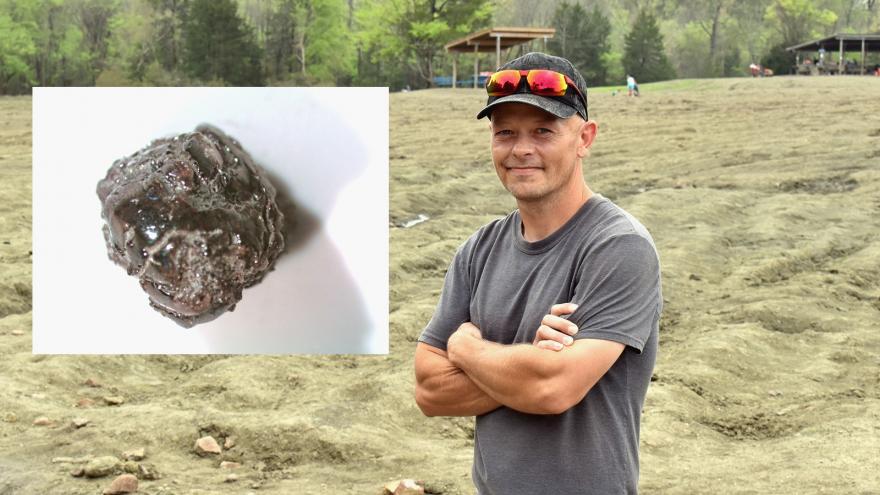 (CNN) -- It's the size of a pinto bean. It's the color of brown coffee. And it's rough and roundish. But in the end, a diamond is a diamond.

The largest diamond of the year has been discovered at Crater of Diamonds State Park in Arkansas, the park announced in a news release on Tuesday.

A more casual visitor might have bypassed the 2.38-carat diamond; it's not exactly what you picture when you think of the gemstones that really sparkle and shine once they're cut.

But Adam Hardin was no ordinary visitor. He's spent more than a decade searching for diamonds at the park, according to the release, and has found hundreds of them in that time.

All that experience paid off during an April 10 visit -- and it's his first diamond find there weighing more than 2 carats.

Hardin was using a common screening technique to make his find, the release said.

In that method, visitors scoop up what they can from the earth and then wet sift it in a basin of water using a screen set. The aim is to wash away soil and separate the gravel by size, according to Park Interpreter Waymon Cox.

He said the smaller gravel is then sorted by weight, with the heavier material sent to the bottom of the screen. (See how screening works in this YouTube video).

"When it's flipped upside-down, the heavier gravel -- and sometimes a diamond -- can be found on top of the pile," Cox said.

Hardin was wet-sifting soil from the East Drain of the park's 37.5-acre search area when he found the gem, the release said.

"It was right in the middle when I flipped my screen over," Hardin said. "When I saw it, I said, 'Wow, that's a big diamond!' "

Confirmed! It's a diamond

Hardin took the gem to the park's Diamond Discovery Center, where staff registered it as a 2.38-carat brown diamond, the release said.

"It has a metallic shine typical of all diamonds found at the park, with a few inclusions and crevices running all along the surface," Cox said.

"One of the other guys and I have been going back and forth, seeing who can find the biggest diamond," Hardin said in the release.

"I found a big one, then he got a 1.79-carat, and we were joking about who would find the next big diamond and be 'king of the mountain.' As soon as I found this one, I had a feeling I had him beat. Now he's trying to find a bigger one, but I'm planning on staying on top!"

Pretty and not so pretty

Crater of Diamonds State Park is in Murfreesboro, in the southwestern corner of Arkansas. Visitors find an average of one to two diamonds each day, the park said.

The park said 260 diamonds had been registered in 2022 at the time the news release went out.

The largest diamond discovered in the United States was found here in 1924, the park said. It was named Uncle Sam. The white diamond had a pink cast and weighed 40.23 carats.

But Hardin loves his coffee-brown find. He named it Frankenstone, the release said.

"I thought of the name because it has a pretty and kind of not-so-pretty look to it," Hardin said. "Us diamond miners call that 'character!' "

Hardin said he usually sells his diamonds locally and that he also plans to sell this one.