Worm supermoon is illuminating the sky this week 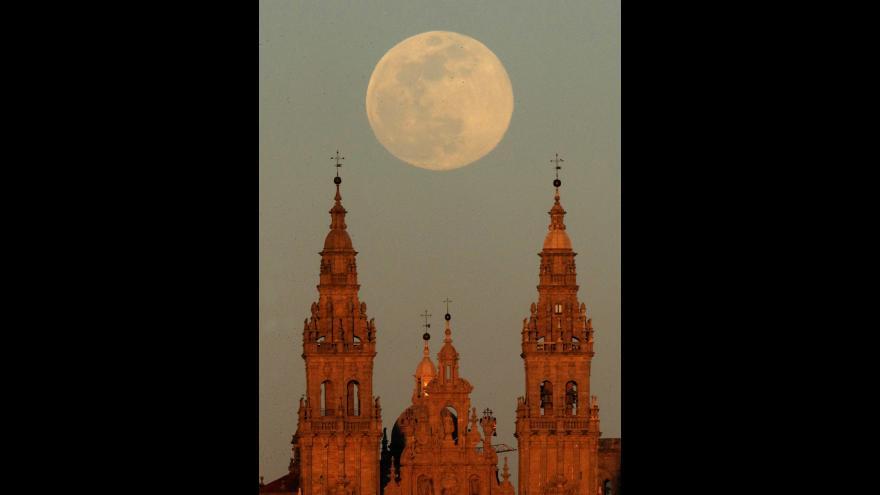 A view of the supermoon that announced the start of the spring over the Santiago de Compostela cathedral, Galicia, Spain, 20 March 2019. A supermoon heralding spring will light up the sky on March 8 and 9, 2020.

(CNN) -- A supermoon heralding spring will light up the sky Sunday and Monday. The true full moon occurs Monday, but it will appear full for three days from early Sunday until early Wednesday, according to NASA.

For those in the US, March's full moon also happens during Daylight Saving Time -- so don't forget to "spring forward" and set those clocks an hour ahead.

Supermoons occur when the moon is within 90% of perigree, or its closest approach to Earth in orbit. The moon will appear brighter and bigger in the night sky and hopefully no clouds and inclement weather will obscure the view.

March's full moon is also known as the Full Worm Moon. Traditional and Native American names for each full moon of the year are derived by how they helped to track the seasons. In this case, the ground began to soften in March so that earthworms could appear, drawing more birds to feed, according to the Farmer's Almanac. This moon is associated with spring for that reason.

This year, the spring equinox occurs on March 19, and it's arriving earlier than it has in more than a hundred years.

This full moon also goes by other names, including the crow moon, the crust moon, the sap moon, the Lenten moon and the sugar moon, largely to herald the arrival of spring, and in the case of the Lenten moon, the Catholic season of Lent.

Normally, there are 12 full moons in a year because one occurs each month. But in 2020, October will have two full moons, once on October 1 and then again on October 31.

Two full moons in the same month is known as a "blue moon." And the fact that the second one falls on Halloween truly makes this event "once in a blue moon."

This year will have up to four supermoons total, when the moon appears even larger and brighter in our sky. The next supermoon will occur on April 7.