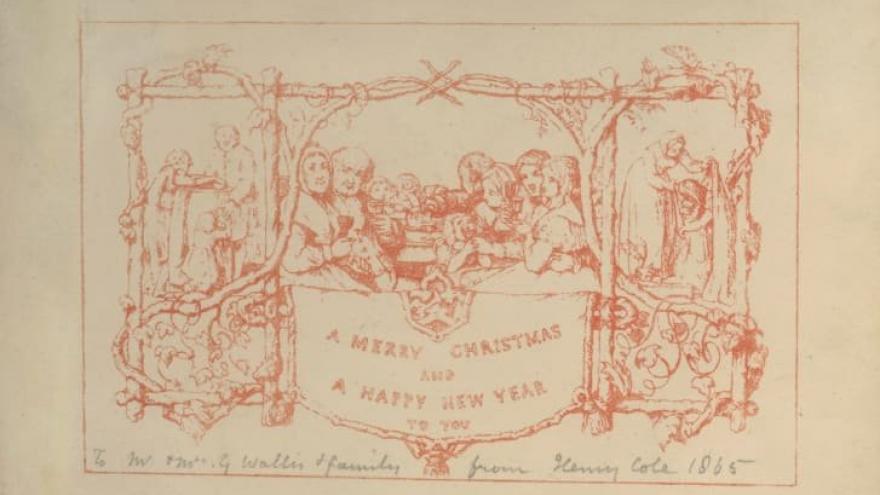 (CNN) -- The world's first printed Christmas card has gone on display at London's Charles Dickens Museum, just in time for the start of the festive season.

The card, which pictures a family gathered around a table enjoying glasses of wine, was produced by Henry Cole, John Calcott Horsley and Joseph Cundall in 1843 -- the same year that Dickens' "A Christmas Carol" was published.

Hand colored and with blank spaces for the recipient's and sender's names, the card bears the message "A Merry Christmas and a Happy New Year to you" and was sent from a son to his parents.

As well as picturing a family celebrating Christmas, the card also features images of the poor being clothed and fed, signifying Christmas charity.

The card -- on display from Wednesday at the Charles Dickens Museum -- is hand lithographed, is one of just 1,000 printed, and would have sold for a shilling at the time.

A proof copy, inscribed by Cole in 1865, is also on display in the collection.

Cole, a civil servant, was instrumental in reforming the British postal system in the 1840s, helping to introduce the Penny Post delivery system in 1840.

According to London's Victoria and Albert Museum, the Penny Post encouraged the sending of seasonal greetings on decorated letterheads and visiting cards.

According to the Charles Dickens Museum, the modern idea of Christmas, and it's associated traditions, emerged in the first half of the nineteenth century.

"In newly-industrialized Britain, the technological advances which revolutionized the work of bookbinders, printers, typesetters and illustrators, also prepared the perfect conditions for Dickens to introduce 'A Christmas Carol' to the world," the museum said in a statement.

Dickens' writing is thought to have shaped many modern day Christmas traditions. "A Christmas Carol" was one of the author's many Christmas books.

John Drew, professor of English literature at the University of Buckingham and specialist in Dickens' work, told CNN that in the period where Dickens and Cole were working, developments in the publishing industry and the proliferation of printed media helped to establish and popularize festive traditions.

"Dickens and Henry Cole are in the beginning of this heyday of the influence of the media -- and Dickens is able to peg these traditions to a very recognizable story," he told CNN.