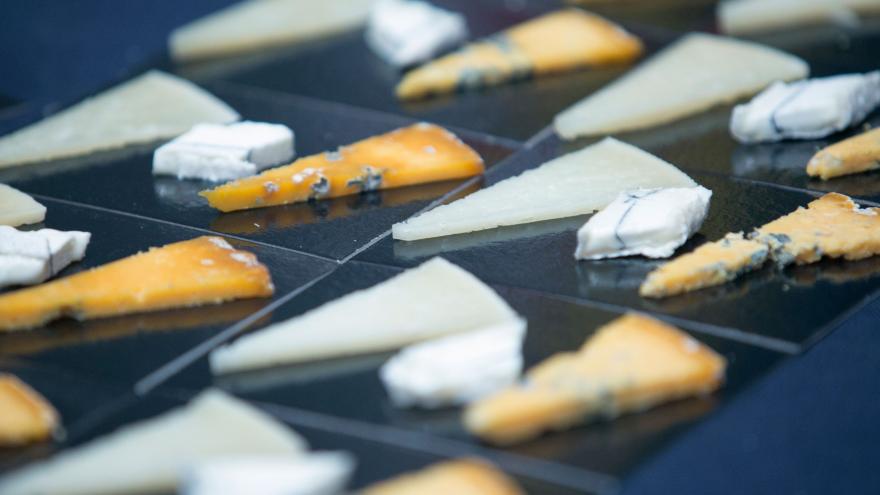 (CNN) -- A soft goat's cheese from Spain won first place at the World Cheese Awards on Wednesday, besting the field of 4,079 entries from more than 40 countries on five continents.

The winning cheese, called Olavidia, from an artisan cheesemaker using the commercial name Quesos y Besos (Cheeses and Kisses), got 103 votes, besting the second-place finisher, a soft cheese from France's Fromagerie Berthaut washed with the spirit Marc de Bourgogne, with 98 votes, that had been ahead until the very last minute.

A British judge, Jason Hinds, told fellow judges on the panel just before they voted that the goat's cheese had a "rich, seductive, creamy texture" and "a flavor that was round and warm."

"I just wanted to go to bed with it," Hinds added, with a grin, at the ceremony livestreamed by the organizers from Spain's northern city of Oviedo.

Silvia Pelaez, an owner of the winning cheese producer, said, "We are a small humble cheesemaker in Jaen," a city in southern Spain best known for its olives, which are widely exported.

"Daily labor has its reward," Pelaez said, adding that the cheesemaker, officially known as Lacteos Romero Pelaez, has only six employees.

Her goat's cheese has a noticeable black stripe in the middle, which the judges mentioned. The competition organizers said the cheese was "matured with penicillium candidum and olive stone ash." Some comments indicated the ash accounted for the black stripe.

The previous winner was an organic blue cheese, Rogue River Blue, the first-ever American champion in these awards. That was in October 2019 in Bergamo, Italy. The annual cheese showdown was not held last year due to the Covid-19 pandemic.

Some 250 judges, including food scientists, cheese sellers, chefs and sommeliers, mingle with the cheeses and with each other during the competition. It began at 88 tables in a large conference hall, each staffed by three judges who tasted and rated some 45 cheeses spread out before them at each table.

They focused on the "look, feel, smell and taste of each entry, scoring aspects such as the appearance of the rind and paste, as well as the cheese's aroma, body and texture, with the majority of points awarded for flavor and mouthfeel," the organization's website said.

That narrowed the field to 88, or one "big cheese" per table. The 88 semi-finalists later gave way to just 16 finalists. Their fate was decided by a so-called "super jury" of 16 judges who have no commercial link to the producers of these cheeses, the organization said.

In the final round of the judging, each of the 16 judges spoke about one cheese, lauding its characteristics, and then all 16 judges tasted that same cheese, and voted by raising cards bearing a number, on a 1 to 10 scale, assigning points to that cheese, in plain view of an auditorium audience. The same method was then used for the other 15 finalists.

The winning goat's cheese was the last to be judged among the finalists, and it carried the day.

But is it the best in the world right now?

Its title is "world champion cheese," John Farrand, managing director of the UK-based Guild of Fine Food, which organizes the cheese awards, told CNN. "The judges consider it the best cheese in the world. It has the new crown."