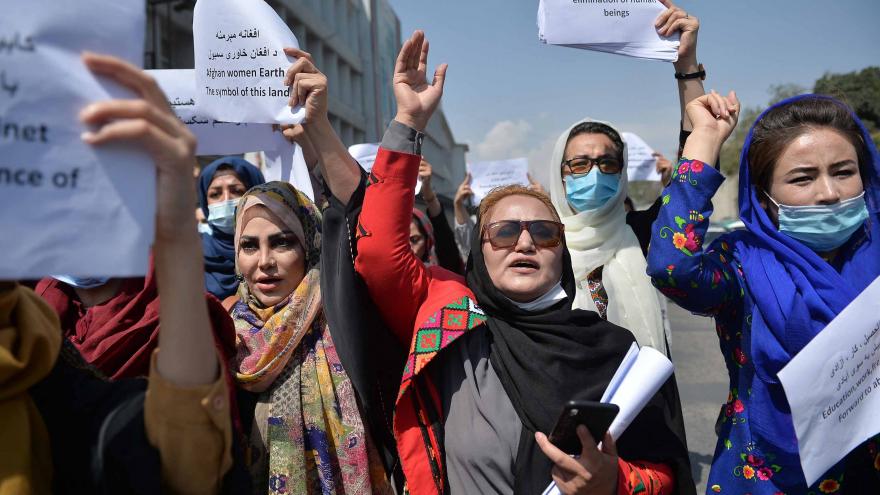 In spite of the risk, a group called the Women's Political Participation Network marched on the street in front of Afghanistan's Finance Ministry, chanting slogans and holding signs demanding involvement in the Afghan government and calling for constitutional law.

Footage showed a brief confrontation between a Taliban guard and some of the women, and a man's voice could be heard saying, "Go away!" before chanting resumed.

The gathering was relatively small -- video of the scene livestreamed by the group showed just a few dozen demonstrators -- but represented an unusual public challenge to Taliban rule.

The militant group are involved in internal discussions about forming a government, but have already signaled that working women should stay at home, and militants have in some instances ordered women to leave their workplaces.

Taliban leaders insist publicly that women will play a prominent role in society and have access to education. But the group's public statements about adhering to their interpretation of Islamic values have stoked fears that there will be a return to the harsh policies of Taliban rule two decades ago, when women all but disappeared from public life.

Some Afghan women are already staying home out of fears for their safety, and some families are buying all-covering burqas for female relatives.

The demonstration in Kabul comes one day after women staged a similar demonstration in Afghanistan's western city of Herat. Women in that protest held a large sign that said, "No government can be long lasting without the support of women. Our demands: The right to education and the right to work in all areas."

Lina Haidari, a protester at the Herat demonstration, said the "rights and achievements of women, which we have worked and fought for over 20 years must not be ignored" under Taliban rule, according to video of the event from Getty Images.

The protests come amid heightened fears over security under Taliban rule. A prominent Afghan activist said she did not take part in the Herat demonstration because of a direct threat. She spoke to CNN on the condition of anonymity, fearing even expressing interest in the demonstration could subject her to reprisal.

Last month, Taliban spokesperson Zabiullah Mujahid said women should not go to work for their own safety, undermining the group's efforts to convince international observers that the group would be more tolerant towards women than when they were last in power.

Mujahid said the guidance to stay at home would be temporary, and would allow the group to find ways to ensure that women are not "treated in a disrespectful way" or "God forbid, hurt." He admitted the measure was necessary because the Taliban's soldiers "keep changing and are not trained."

Worries about women's fate prompted the World Bank to announce the same day that it was halting financial aid to the cash-strapped country.

In the early months of the Taliban's resurgence in Afghanistan, women were increasingly isolated from society and became targets of harassment and attacks -- including the high-profile murder of three female journalists in March.

In early July, insurgents walked into the offices of Azizi Bank in the southern city of Kandahar and ordered nine women working there to leave, Reuters reported. The female bank tellers were told that male relatives would take their place.

Pashtana Durrani, the founder and executive director of Learn, a nonprofit agency focused on education and women's rights, said last month that she had run out of tears for her country: "We have been ... mourning the fall of Afghanistan for now quite some time. So I'm not feeling very well. On the contrary, I'm feeling very hopeless."