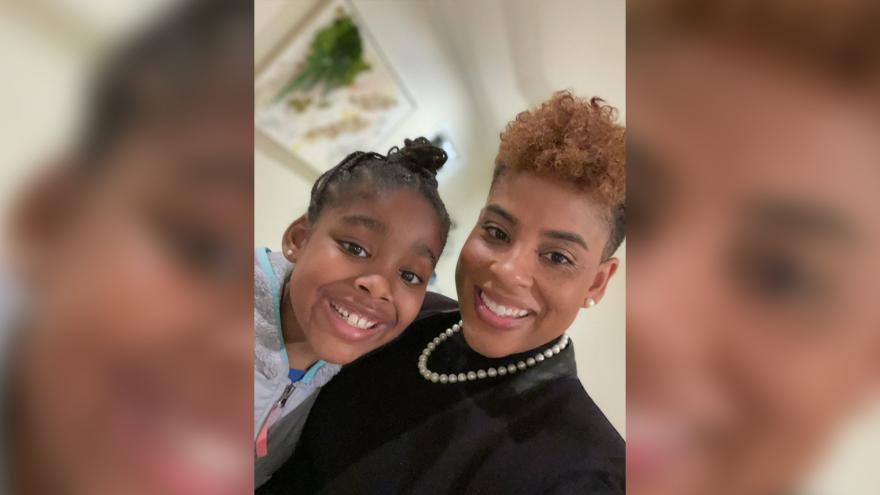 (CNN) -- Wednesday's inauguration is chock-full of sobering firsts. It's beset by the Covid-19 pandemic, threats of violence and the precedent-shattering absence of the outgoing President.

But Dr. Amber Brooks and her two young daughters are celebrating a first far more joyous -- the inauguration of Vice President Kamala Harris, a Black and South Asian woman, the daughter of immigrants and the first woman to serve in the second-highest position in the country.

While Harris dons a royal purple coat and suit by Black designers Christopher John Rogers and Sergio Hudson, Brooks and her daughters, watching her swearing-in safely from home, will rock her preferred uniform -- a string of pearls and a pair of Chuck Taylors.

Brooks and her daughters, ages six and eight, join women across the country and world wearing Harris' signature pearls-and-Converse combo to honor the Vice President as she begins her term.

Harris' pearls, which she's worn in Congress and on the more casual campaign trail, are a nod to her sorority, Alpha Kappa Alpha -- the strand of 20 pearls represents the 20 founders and incorporators of the historic Black sorority.

As for the Chucks -- well, she wears them because they're comfortable. Harris often slipped into Converse when she was campaigning for President and again when she became Biden's vice presidential nominee. She told CBS Sunday Morning the sneakers are her "casual go-to" -- and she's got plenty of pairs to spare.

To honor Harris, Perla Vargas is wearing a white blazer, pearls around her neck and low-top Converse in the Houston, Texas, classroom where she works. The teacher development specialist told CNN the outfit "connects [her] to women across the nation who feel the same as I do."

"As an educator, I'm always trying to set an example," she said of her outfit choice. "Our students are our future politicians, doctors, lawyers, engineers and teachers."

And having a role model in the White House shows girls like Brooks' daughters that achievements like hers are within reach, the anesthesiologist said.

"My daughter told me this morning that she wants to be President," Brooks said. "I almost cried. Having positive female figures of color is important."

The message Harris' inauguration sends resonates worldwide, said Christina Moreno, a Mexican-American woman living in the Netherlands who assists refugee women in finding jobs. Even though in Europe, she's six hours ahead of the inauguration, she'll be wearing pearls and Chucks for the Vice President.

"For me, it symbolizes sisterhood, women's empowerment and the belief that you can do anything you put your mind to," she said of Harris' historic inauguration. "The world is yours."

For many, Harris' inauguration is bittersweet -- it's a moment they wish they could share with their mothers and other women in their lives. Some Twitter users said they'd watch wearing their late mothers' pearls to carry a piece of their mothers with them.

"I was raised by a mother who said to me all the time, 'Kamala, you may be the first to do many things -- make sure you're not the last,'" Harris said in the interview.

The women and girls watching today are determined to prove Harris' mother right.