Woman with dementia sues city of Loveland, police officers, alleging excessive use of force in 2020 arrest 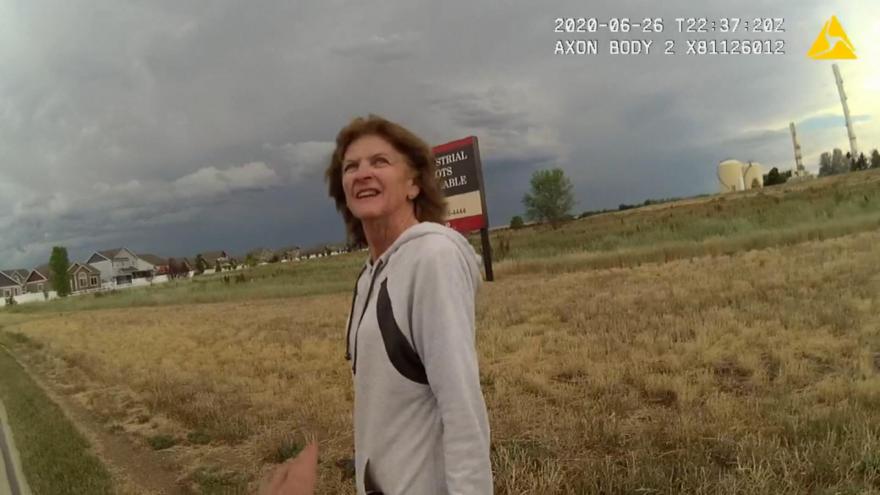 Karen Garner, 73, is suing Loveland, Colorado, and three of its police officers for allegedly using excessive force while arresting her in June 2020.

(CNN) -- A Loveland, Colorado, police officer is on administrative leave and two other officers have been reassigned to administrative duties after a federal civil rights lawsuit alleging excessive use of force was filed against the city of Loveland and the three officers.

The lawsuit, filed April 14, alleges that 73-year-old Karen Garner was forcibly arrested last June for allegedly shoplifting from a Walmart.

According to the lawsuit, Garner has dementia and suffered multiple injuries, including a broken humerus, a dislocated shoulder and a sprained wrist, after she was taken to the ground and handcuffed by an officer on June 26 as she was walking along a road.

The complaint described Garner as 5 feet tall and weighing 80 pounds. The suit claims she accidentally left the store, forgetting to pay for $14 in items.

According to both police and the lawsuit, Walmart employees stopped Garner and took the items back.

CNN obtained the police body camera footage from the office of Garner's attorney.

The video shows Loveland Police Officer Austin Hopp knocking Garner to the ground within 30 seconds after he first got on scene and attempting to detain her.

Garner repeatedly told Hopp that she was going home as he held her down on the ground alongside the road.

"After a short struggle, she is now detained," Hopp says over his radio, with Garner calling out "don't do that" from the ground.

The bodycam footage shows the officer pulling Garner off the ground as he tries to get her into the police car.

"Right now you're resisting, which is not going to fly with me, and before that you tried to steal from Walmart and they caught you and took the stuff back," he tells her as he pushes her toward the police vehicle.

According to the lawsuit, Garner suffers from dementia and sensory aphasia, which limited her ability to understand what was occurring.

Another police officer arrives on scene and walks up to Garner, who is pressed against the police car.

"Quit," the second officer says, as Garner slides down to the ground and says "Ow."

Hopp searches Garner and she struggles with the officers as they try to get her in the car.

A witness attempts to intervene. "Do you have to use that much aggression?" he asks the officers.

"What are you doing, get out of here, this is not your business," Hopp tells him.

The witness asks Hopp for his sergeant's name and tells the officer he saw him "throw the little kid."

"She's not a little kid," Hopp says, adding, "I have to use force to safely detain her, that's what this is. This isn't just some random act of aggression."

"Before you go to a snap judgment, you've got to get all of the facts," he tells the witness.

Several minutes later, a Loveland police sergeant arrives on scene and speaks to both officers.

"A little bloody, a little muddy, that's how it works," the female officer says.

"Is the blood on her?" the sergeant asks.

The bodycam video also shows the officers processing Garner at the police station where she repeatedly tells them she was going to pay for the items.

The 8th Judicial District Attorney's Office of Colorado said a previous administration dismissed Garner's case and "no investigation regarding any improper use of force has been presented to our office."

The district attorney's office said it will review the incident and consider if an independent criminal investigation is needed.

The Loveland Police Department said in a statement that it first learned of the incident via an edited bodycam video posted to its Facebook page on April 14.

"LPD takes very seriously the allegations concerning the arrest of resident Karen Garner, and shares with the community the concerns about video images that became public on Wednesday," the police statement said.

CNN has contacted the Loveland Police Officers Association for comment. It's not clear if Hopp has an attorney and attempts to reach the officer were unsuccessful.