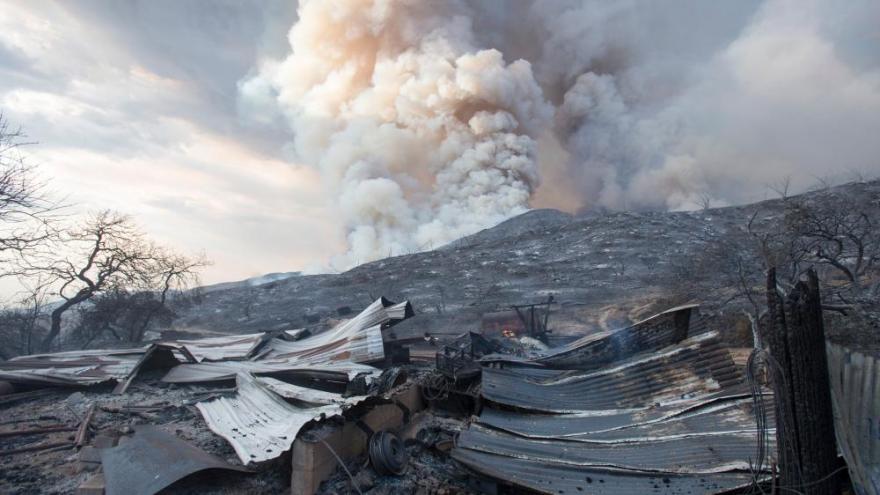 A burned structure is seen at a wildfire in Yucaipa, California, after a couple's plan to reveal their baby's gender at a party went up in smoke Saturday at El Rancho Dorado Park in Yucaipa, when a pyrotechnical device they used sparked a wildfire that has burned thousands of acres.

(CNN) -- The woman best known for popularizing gender reveal parties has a message for the world: Please stop.

This week, as more than 7,000 acres in California were burned after a gender reveal led to a massive wildfire in San Bernardino County, blogger Jenna Karvunidis -- who is largely credited for creating the gender reveal party -- took to Facebook to condemn the over-the-top events.

"Stop having these stupid parties. For the love of God, stop burning things down to tell everyone about your kid's penis. No one cares but you," she wrote.

This isn't the first time a gender reveal party has led to catastrophe, and yet the celebrations have only grown in popularity.

Here's how we got here.

How these parties became deadly

Karvunidis had her own gender reveal party back in 2008, before they became a Thing. She and her husband went what is now the more traditional route, though: cutting a cake that revealed an inside of pink frosting. A girl.

"I just thought it would be really fun for everybody in the whole family to find out," Karvunidis told NPR last year.

She wrote about it on her blog, High Gloss And Sauce, and at the time it garnered some local attention.

But since 2008, these celebrations of life have turned into risky endeavors. Though many still opt for the classic blue or pink cake reveal, others have taken more extreme routes.

The current wildfire in California is massive, but it's just small potatoes compared to a 2017 reveal in Arizona that led to a wildfire spanning 47,000 acres. It all happened when members at the party shot a makeshift target scrawled with the words "Boy" and "Girl."

When the target -- packed with the highly explosive Tannerite -- exploded, a blue cloud poofed upward and immediately ignited the surrounding brush.

It was a boy, and the party ended up costing the guilty patrons more than $8 million in restitution.

Just this April, a gender reveal party in Florida also led to a 10-acre brush fire, after similarly using "Tannerite and a weapon" in the reveal, according to fire officials at the time.

If the damage done by huge wildfires isn't enough, such gender reveal parties have also led to property damage (like the plane crash last year in Texas, or the car that burst into flames in Australia).

And, ironically, this celebration of life has also led to at least one death.

Last October, in Iowa, an idea for a fun gender reveal party went south when the family unintentionally built a pipe bomb. When the device went off, it wasn't just blue or pink gun powder that exploded, but the entire pipe did as well, sending shrapnel flying.

A piece of metal hit a grandmother, who was standing about 45 feet away, and killed her.

Danger aside, there's also overwhelming criticism of the parties as a system that upholds the gender binary -- that is, it's either a boy, or a girl.

Karvunidis herself has hinted at this criticism as well.

In 2019, she wrote that "assigning focus on gender at birth leaves out so much of their potential and talents that have nothing to do with what's between their legs."

Studies have backed up this same notion.

One such study, published in 2017 by Carly Gieseler in the Journal of Gender Studies, characterized the harms of the gender reveal party like this: "It allows adults to recuperate what they have learned from their own gendered constructions, reinscribing expectations and assumptions onto the unwritten body of the unborn and propelling these ideals into the digital, social, public world."

As for Karvunidis's daughter, the focus of that pinnacle pink cake in 2008, she's "a girl who wears suits!" Karvunidis wrote -- meaning to highlight the futility of celebrating these gender norms.