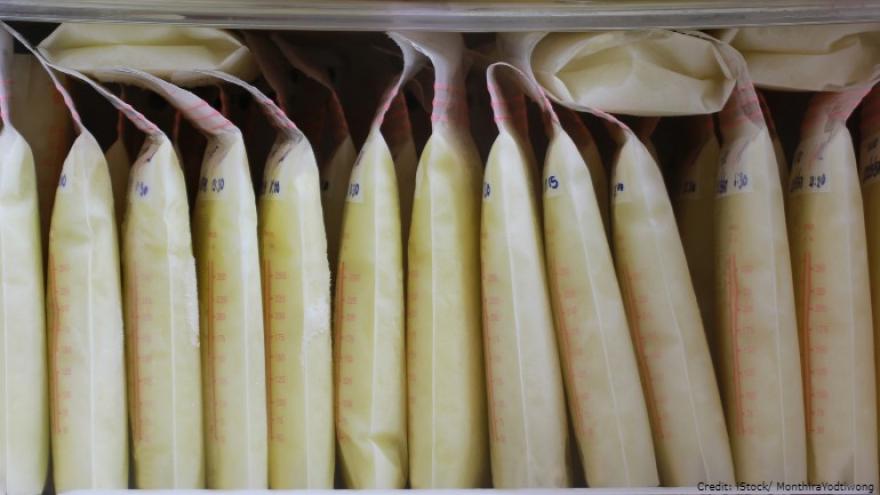 House impeachment managers, lead by Congressman Jamie Raskin, Lead Manager, proceed through the Capitol Rotunda from the House side of the U.S. Capitol to the U.S. Senate chamber as the second impeachment trial of former U.S. President Donald Trump begins February 9, 2021 in Washington, DC.

(CNN) -- When Katy Bannerman pulled open her deep freezer it was overflowing with packets of breast milk, 8,000 ounces to be exact. Over the course of the coronavirus pandemic, the North Carolina mother of two began donating her extra supply of breast milk to mothers struggling with breastfeeding issues.

Bannerman was inspired to donate her surplus breast milk after struggling with lactation issues herself during her first son's infancy. But when she became pregnant with her second child, Bannerman was determined to overcome her past issues.

After seeking help from a private lactation consultant, Bannerman began overproducing, pumping up to 90 ounces of breast milk in one day. She decided to donate her surplus milk supply to help out moms who struggled just like she did early on.

"That was kind of my intended recipient, someone who had themselves struggled with breastfeeding, for one reason or another," Bannerman told CNN.

At first when she began overproducing, Bannerman didn't know what to do with so much extra breast milk. She turned to local Facebook groups where women fostered online communities around breastfeeding and nursing, including calls for breast milk.

Bannerman ended up posting about her surplus milk supply and received tons of messages from interested mothers.

"I was so happy to be able to donate. At one point I had consistent people that I would donate to, they would come by every week," she said.

One of the families that benefited from Bannerman's donations had recently adopted a baby and was in need of breast milk. Another family had a baby that suffered from borderline failure to thrive, a condition where a child's weight is significantly below that of other similarly aged children. Bannerman's breast milk supply had a high fat content which could help increase the baby's caloric intake and gain more weight faster.

The Centers for Disease Control and Prevention estimates that 60% of mothers stop breastfeeding earlier than they want to, citing lactation problems, lack of family support, concerns about their baby's weight and nutrition, among other factors. The American Academy of Pediatrics also recommends that infants be exclusively breastfed their first six months, but only about 25% of them actually are.

During her first child's infancy, Bannerman was only able to breastfeed for two months and said, "I wasn't able to nurse like I wanted to and that ate me away, like so horribly."

Beating herself up and feeling as though she had failed, Bannerman was determined to seek help from a private lactation consultant with her second child. After successfully overcoming her lactation issues, Bannerman now encourages women to seek out all the resources available to mothers.

"That's another reason why donating was so important to me, is that women were able to still take care of themselves and take care of their babies without that guilt," Bannerman said.

Bannerman eventually stopped pumping a surplus of breast milk in October. She donated her last supply in December.