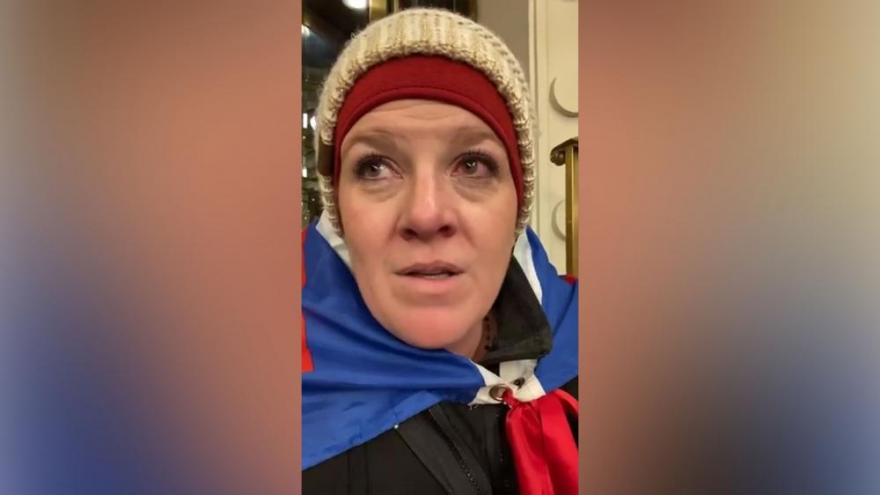 Jenny Cudd, seen in this Facebook video, has been charged in connection with the U.S. Capitol Hill riot and insurrection.

(CNN) -- A Texas woman charged in connection with the Capitol insurrection has asked a federal judge to let her travel to Mexico for a "work-related bonding retreat," according to court records.

Jenny Cudd, a flower shop owner and unsuccessful mayoral candidate from Midland, wrote to a federal judge on Monday asking for permission to visit Riviera Maya, Mexico, for a four-day retreat this month. The court docket for her case doesn't yet show a response from the judge.

She was charged with two misdemeanors -- knowingly entering a restricted building and disorderly conduct on Capitol grounds -- and was released shortly after her arrest in January. The Justice Department didn't try to keep her in jail before trial, an aggressive move they've reserved for the handful of riot-related defendants accused of violent crimes and conspiracies.

A lawyer representing Cudd previously told CNN she plans to plead not guilty. Her lawyers have also said in court filings that she is complying with all the court-ordered conditions of release.

Cudd's lawyers did not respond to emails and calls on Wednesday seeking comment about her trip to Mexico. They said in court filings that even before the Capitol attack, she was planning to visit Riviera Maya, a tourist hotspot near Cancun that has stayed busy during the pandemic.

In court filings, the Justice Department has described Cudd as unrepentant for her role in the insurrection, citing her comments in Facebook posts and interviews shortly after the riot.

In the livestream, Cudd allegedly detailed how she "pushed and pushed" and "got up to the top of the Capitol." She claimed, "there was a door open and we went inside," and later was able to "break down the Nancy Pelosi's office door," referring to the Democratic speaker of the House.

"I would absolutely do it again," Cudd said in a local news interview two days after the insurrection, according to court documents, referring to the storming of the Capitol building.