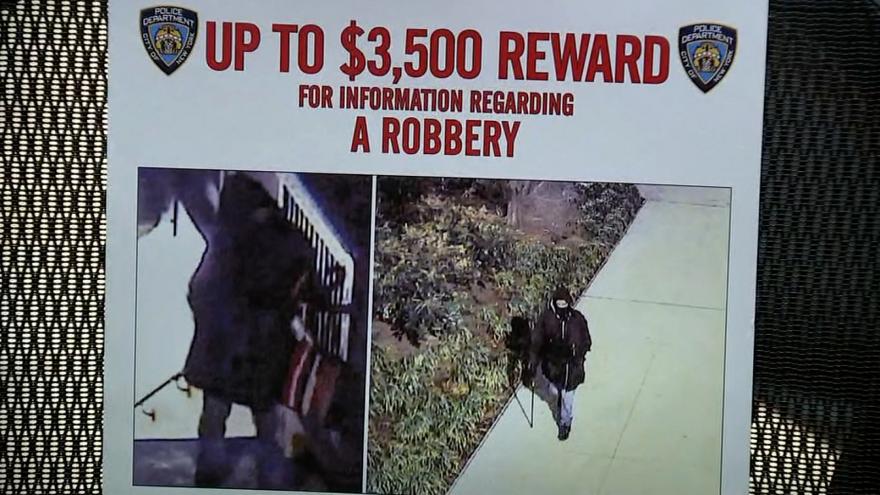 By Brynn Gingras, Kiely Westhoff and Laura Studley, (CNN) -- A 57-year-old woman was hit in the head with a hammer several times and robbed in one of the latest violent crimes in a New York subway station, police said.

Police are searching for a suspect who kicked the woman and struck her "numerous times" and fled on foot with her purse, New York Police Department Chief of Detectives James Essig said at a news conference Friday afternoon.

The woman's family identified her as Nina Rothschild, a scientist for the New York City Department of Health. She was attacked just 15 minutes after leaving work, police said.

The woman was attacked about 11 p.m. Thursday by a 6-foot tall male wearing a dark jacket, bluejeans and holding a cane, Essig said.

"This is an unprovoked, brutal and appalling crime on a woman who was just trying to get home after a day's work," Essig said.

Rothschild, who was bleeding from her brain, was taken to Cornell Medical Center with a fractured skull and lacerations to her face, Essig said.

She has had part of her skull replaced with wire mesh, according to her brother, Gerson Rothschild. She also has a drop foot, a condition where the patient is unable to lift their foot. It is unclear if it was nerve damage or a mental block, he said.

"Of course, I can't wish this on someone else, it shouldn't happen to anyone," Gerson Rothschild told CNN on Saturday. "I wish it wasn't my sister, but we have to deal with what we have."

The sibling pair lost their parents within 29 days of each other in 2000.

"It's just Nina and me, basically it's just the two of us," Gerson Rothschild said. "Little brother will do whatever he can to protect big sister.

Chief of the NYPD Transit Bureau Jason Wilcox said additional patrols will be added in all boroughs but noted the Queens Plaza station where the incident took place is "a priority station" given it is heavily trafficked.

"We are definitely working very hard to increase uniform presence throughout the system, on the trains, on the platforms, along the mezzanines, in the stairs, so it is an absolute priority," Wilcox said.

"My directive and our mission is to be highly visible, on the trains, on the platforms moving around, taking train runs from other stations, so that's what we're very dedicated towards," Wilcox said.

There have been more than 1,000 arrests in the transit system so far this year, Wilcox said, a 54% increase compared to data from the same time last year.

The attack happened a week after officials unveiled a new transit safety plan to combat crime and address homelessness in the city's transit system as part of a new public safety initiative.

Mayor Eric Adams said Friday the objective is to go after people who violate basic rules, who don't allow "the system to function in a clean, safe manner."

Adams said safety crews are operating overnight and will target all crimes from fare evasion to smoking on the subway.

Gerson Rothschild said his "all for" the safety plan.

"The thing is I just think it's a little early to see results, we just need to give him a little more time. ... Hopefully, my sister will be the last to be attacked."

"It's a big city, you're going to have something happen whether it's under [Rudy] Giuliani, [Bill] de Blasio or [Eric] Adams, bad things happen," Gerson Rothschild said. "I just hope that the perpetrator is caught and punished."

Mayor Adams on Friday said he was "really angry" about the attack on Rothschild, and tweeted that the incident was "particularly horrific."

"Violence against any New Yorker is unacceptable but an attack of a city worker who has dedicated her work to keeping people safe is particularly horrific," the mayor tweeted.