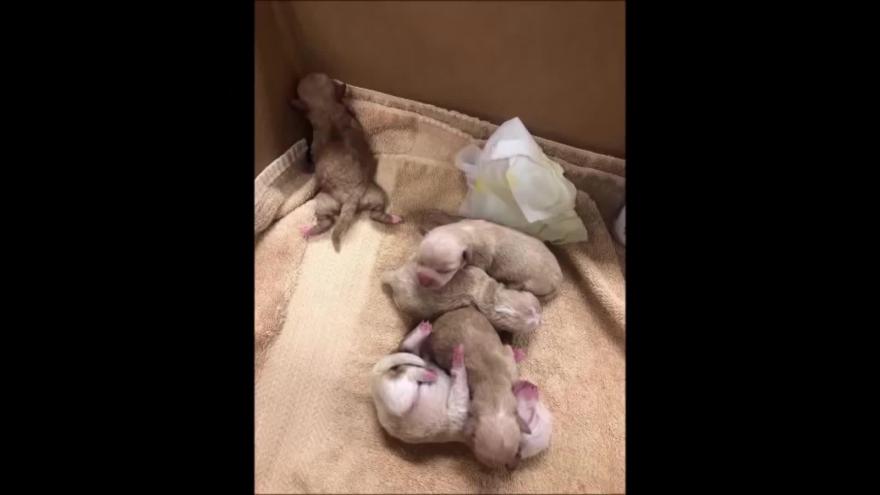 The puppies are about three days old, authorities said.

(CNN) -- The woman who authorities say was caught on video tossing a bag of newborn puppies near a dumpster in Coachella, California, last week was arrested on Monday. Authorities have also now discovered dozens of dogs living in her home.

Culwell could face up to seven counts of felony animal cruelty, Welsh said.

Culwell was seen in the video leaving the seven newborn puppies in a plastic bag near a dumpster behind a NAPA Auto Parts store on Thursday afternoon, according to Riverside County Animal Services.

Riverside County Animal Services officers discovered 38 dogs living in Culwell's home, which were "not in great condition" and not friendly, Welsh said.

Welsh said he didn't know what breeds of dogs were at the home. The dogs have since been taken to the Coachella Valley Animal Campus.

Puppies may 'not have survived much longer'

Commander Chris Mayer with animal services said he was building an animal cruelty case against the woman with the help of the Riverside County Sheriff's office and the District Attorney's office.

A passerby discovered the bag, and a store employee then contacted animal services. The puppies were about three days old and believed to be terrier mixes, animal services said.

"If not for the Good Samaritan's actions, the puppies may not have survived much longer," said the county animal services in a release. "The mid-day temperatures in Coachella on Thursday were in the mid-90s range."

Animal Service's veterinary team members cared for the puppies and found a rescue group to accept and bottle feed them, according to the release.

"There is no excuse for dumping puppies," Mayer said. "Especially in today's age when we or other shelters would be willing to get these animals to foster parents or rescue partners. This was a shameful act."