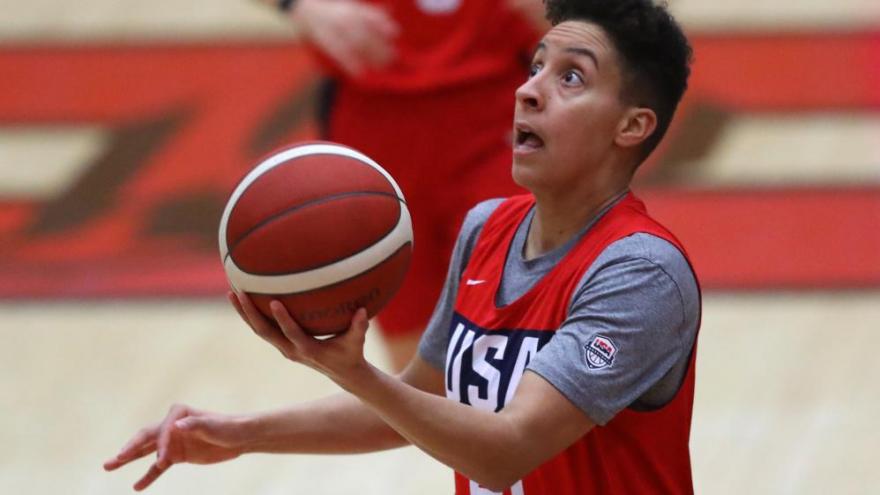 WNBA stars Layshia Clarendon, Breanna Stewart and A'ja Wilson will be wearing special uniforms designed to honor women who the league says "have been the forgotten victims of police brutality and racial violence" when the league's 2020 season tips off later this month.

(CNN) -- This season's WNBA players hope that before you chant their names, you'll remember the victims of police and racial violence too.

When the league's 2020 season tips off later this month, WNBA players will be wearing special uniforms designed to honor and demand justice for women who they say "have been the forgotten victims of police brutality and racial violence," according to a press release on Monday.

The league's players will wear warm-up shirts with the words "Black Lives Matter" displayed on the front and "Say Her Name" on the back, alongside Breonna Taylor's name.

Taylor, a 26-year-old Black EMT, was killed when police broke down the door to her apartment in an attempted drug sting and shot her eight times. Though one of the officers involved was fired in June, no criminal charges have been filed yet against the officers. The FBI is also investigating Taylor's death. Her family has since filed a wrongful death lawsuit against the city.

The WNBA and the players union announced that the new uniforms and spotlight on the women who have died are part of a bigger initiative to dedicate the upcoming season and beyond to the advancement of social justice.

A new Social Justice Council has been formed and will be led by players "to address this country's long history of inequality, implicit bias and systemic racism that has targeted black and brown communities," the press release says.

"With 140-plus voices all together for the first time ever, we can be a powerful force connecting to our sisters across the country and in other parts of the world," WNBA Player Association President Nneka Ogwumike said in a statement.

"We are incredibly proud of WNBA players who continue to lead with their inspiring voices and effective actions in the league's dedicated fight against systemic racism and violence," said WNBA Commissioner Cathy Engelbert.

"Working together with the WNBPA and the teams, the league aims to highlight players' social justice efforts throughout the 2020 season and beyond. Systemic change can't happen overnight, but it is our shared responsibility to do everything we can to raise awareness and promote the justice we hope to see in society," she said.

The WNBA is planning for a 22-game regular season to start in late July.