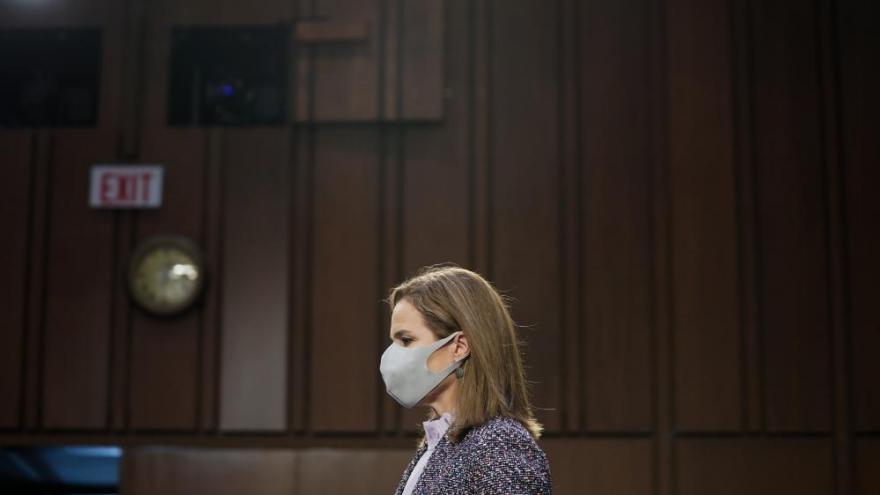 (CNN) -- The Senate Judiciary Committee will vote on Supreme Court nominee Amy Coney Barrett on October 22, over the protests of Democrats who moved Thursday to indefinitely delay the proceedings because millions of Americans are voting for the next president.

At the fourth day of Barrett's confirmation hearings, Democratic senators argued that there's never been a Supreme Court justice nominated this close to the election and confirmed before it. The Senate has taken half the average time to consider the nomination.

"She has been rushed in a way that is historically unprecedented," said Connecticut Sen. Richard Blumenthal. "There's never been a nomination in an election year after the month of July, and the purpose of doing it is simply to have a justice on the Supreme Court, as the President said, to decide the election, and to strike down the Affordable Care Act."

Republicans disagreed, saying that a Republican president and a Republican-led Senate confirming a conservative justice on the Supreme Court is compliant with the Constitution and the Senate's history.

"The precedent is clear," said Republican Sen. Ted Cruz of Texas. "If the President and Senate are of the same party, the Senate, in all but extraordinary circumstances, confirms that nominee."

South Carolina Sen. Lindsey Graham, the Judiciary Committee chairman, said that Barrett is "exactly the kind of person that you would expect any Republican president to consider" due to "who she is, the way she's lived her life and the philosophy she espouses." He said that Democrats should try to win elections if they wanted to confirm Supreme Court justices.

"Y'all have a good chance of winning the White House," he said. "I don't know where the polls are going to be."

"Thank you for acknowledging that," Democratic Sen. Amy Klobuchar of Minnesota interjected.

The scheduling of the vote comes ahead of the fourth day of hearings, which do not feature Barrett herself, but instead witnesses expected to offer competing arguments over the confirmation.

The slate of names hail from an assortment of backgrounds. The Republican lineup is poised to speak to Barrett's legal credentials, while Democrats appear to have chosen witnesses that can bring a personal message to the sweeping issues that have defined the first three hearings.

Another Republican witness, retired Judge Thomas Griffith, who sat on the US Court of Appeals for the DC Circuit, wrote in a Bloomberg Law Op-Ed earlier this week that Barrett's faith "won't dictate her rulings."

Saikrishna Prakash, a professor of law at the University of Virginia, and Amanda Rauh-Bieri, who clerked for Barrett on the 7th Circuit, will also testify along with Laura Wolk, who was a student of Barrett's at Notre Dame Law School.

The Democratic witness list, meanwhile, will bring a mix of expert voices and personal stories to the issues of health care, abortion and other topics on which the party had grilled Barrett in recent days.

Stacy Staggs, a mother of 7-year-old twins who have multiple pre-existing conditions and rely on the Affordable Care Act, will discuss "the devastating effects on her family if the Supreme Court overturns" the ACA, Feinstein said in a statement.

And the CEO of Care Free Medical, Dr. Farhan Bhatti, will similarly discuss "the harm to his patients if the Supreme Court overturns the Affordable Care Act," Feinstein said.

On the issue of abortion, Democrats have tapped Crystal Good, who "fought for her right to obtain an abortion at age 16." She is set to speak on "the importance of reproductive rights and justice."

Kristen Clarke, the president of the Lawyers' Committee for Civil Rights Under Law, will speak on voting rights and civil rights protected under the Constitution.

The witness testimonies will cap a contentious week of hearings that have seen Barrett repeatedly decline to wade into a slate of issues.

Beyond health care and abortion, Democrats have questioned Barrett on her positions and writings on gun rights, voting rights and whether she would recuse herself on election disputes involving the President that might reach the high court.

Repeatedly though, Barrett has declined to engage with the senators on key issues, citing a standard named for the confirmation hearing of the justice she would replace, the late Ruth Bader Ginsburg, not to discuss cases that she could be hearing in the future.

Despite objections from Democrats, the GOP-led panel is moving briskly through Barrett's confirmation hearings and on track to vote next week, with the Senate planning its vote by the end of the month.

"There's nothing unconstitutional about this process. This is a vacancy that's occurred through a tragic loss of a great woman, and we're going to fill that vacancy with another great woman," Graham said Monday.

"The bottom line here is that the Senate is doing its duty constitutionally."