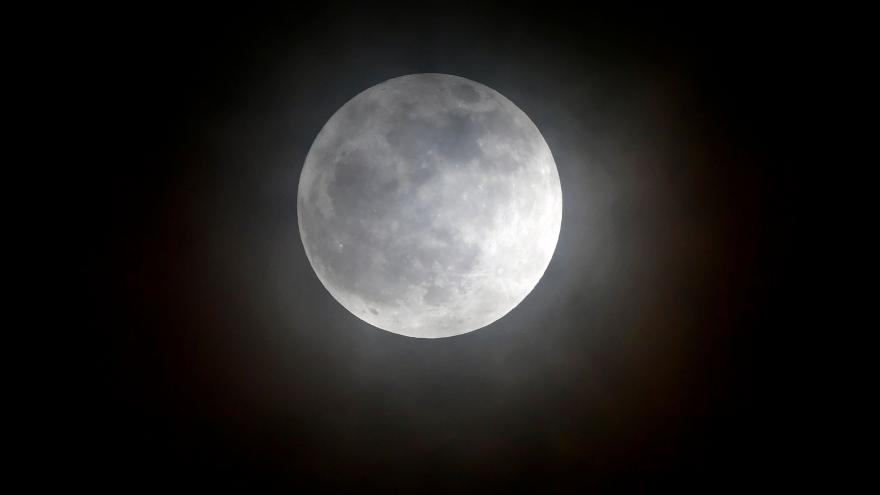 (CNN) -- Bundle up to enjoy the last full moon of the year.

The last full moon of 2021 will reach peak illumination on Saturday, December 18, at 11:32 p.m. ET, according to NASA, but you can trace its path across the sky starting at just before sunset.

Known as the "cold moon" by the Mohawk people, this full moon occurs just a few days shy of December 21, the longest night of the year in the Northern Hemisphere, also known as the winter solstice. No wonder it's also named "the long night moon."

"My encouragement is always that people get out whenever they can to look at the moon," said Noah Petro, chief of NASA's planetary geology, geophysics and geochemistry lab. "There is an instant when the moon is its fullest, but we can't perceive that with the naked eye."

Watching the full moon isn't something that rewards precision, unlike a solar eclipse, he said.

For best viewing, Petro said would-be moon watchers should go out on Friday night to stake out a spot and look up and east. "You want to be away from tall buildings and bright lights and obstructions."

Because December's full moon occurs during such a long night in the Northern Hemisphere, it "will shine above the horizon for a longer period of time than most full moons," CNN meteorologist Tom Sater said.

Why this is a micromoon

In contrast, a supermoon occurs when the moon is closest to the Earth, or the perigee. This year saw supermoons in the months of April, May and June.

The moon will look full to our eyes a day either side of peak illumination, Petro said. "It may be cloudy in one place so if you can't get out Saturday, get out Sunday."

Moon lovers in the Southern Hemisphere can get out during the night to see a moon that looks full. However, it will be a flipped image from what people in the Northern Hemisphere will see, Petro said. "The moon's not rotating -- it's your perception of where it is because you're walking around on this globe."

Other names for this December full moon include "bitter moon" in China and "oak moon" in medieval English, according to Star Walk. In the Southern Hemisphere, Saturday's full moon will occur near the December 21 summer solstice, leading some there to call it the "strawberry moon," like inhabitants of the Northern Hemisphere called their June full moon, since it's the first of four moons in the summer season.

The last major celestial event of the year will be the annual Ursids meteor shower, which can be seen between December 17 and 25, peaking on Christmas night. Given the presence of this full moon, however, only the brightest meteors will be seen.

"No two moons are identical," Petro said. "The moon that rises in a month from Saturday is a little different and so I really do hope ... for everyone to begin to develop a relationship with the moon."